1992 (December):  Li Hongzhi was acknowledged as the “star” of the Asian Health Expo, held in Beijing.

1999 (May):  “Clear Wisdom,” Falun Gong’s first web site, was established outside of China, signaling the importance of Falun Gong practitioners in the Chinese diaspora.

1999-2001:  Falun Gong practitioners continued to demonstrate in China, despite an ongoing clamp-down by authorities.

2001 (January 23):  The self-immolation of five apparent Falun Gong practitioners in Tian’anmen Square, Beijing occurred. The Falun Gong organization denied that the five were practitioners, but Falun Gong appeal was eroded in China and elsewhere.

2009:  The Communist Party heir apparent and current president, Xi Jinping, was put in charge of  a project to crack down on Tibetans, democracy activists, and Falun Gong practitioners around sensitive anniversaries.

2009 (March):  The U.S. House of Representatives passed a resolution recognizing and condemning the ongoing persecution of Falun Gong in China.

Li Hongzhi ( 李洪志) in May 1992. It was part of the “qigong boom” (qigong re 气功热 ), a mass movement that spanned the 1980s and 1990s and was extremely popular, particularly in urban China. Qigong (“the discipline of the vital breath”) is a varied set of practices based on the belief that practitioners can, through gestures, meditation, and visualization, mobilize the vital breath (qi) in their bodies to achieve greater physical and mental health. Although such beliefs and practices have ancient roots, modern qigong is an invention of the twentieth century and was systematized in the early 1950s as part of the creation of Traditional Chinese Medicine in the People’s Republic of China (Palmer 2007).

Qigong became a mass movement under very particular circumstances. In the late 1970s, laboratory experiments purportedly discovered that qi had a material, scientific existence. This discovery dovetailed with post-Mao China’s emphasis on the “Four Modernizations,” to be achieved through science and technology, and Chinese authorities gave the green light to the large-scale development of qigong. This development was largely carried out by “qigong masters,” charismatic figures who claimed powers greater than simply teaching followers to circulate their qi. Qigong masters could exteriorize their own qi to heal the sick, summon rain, and perform any number of miracles. Successful masters built nation-wide networks of millions of followers who paid to attend the master’s lectures in sold-out sports arenas (where the master’s very words were believed to contain his wondrous qi), bought the master’s books and other paraphernalia, and followed the movement in the qigong press.

Li Hongzhi and Falun Gong were part of the qigong movement, and both were accepted by the qigong establishment in the early period of Li’s successful efforts to establish Falun Gong. At the same time, Li sought to distinguish his teachings from others who had been accused of fraud and chicanery as some masters played on their followers’ enthusiasm to make large sums of money. Li promised to help his followers “cultivate at high levels” soon after beginning their practice. On the one hand, this was an effort to avoid the flashy miraculous powers displayed by certain qigong masters. Li told his followers, for example, not to use their qi to heal other people. On the other hand, Li’s promise to guide his followers to high-level cultivation relied on Li’s own consi 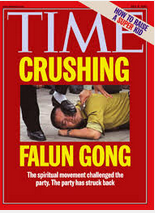 derable powers: he claimed to be able to cleanse their bodies, among other ways, by installing a perpetually revolving wheel in their stomach. Li’s miraculous powers were different from those of other masters in that they happened at an unseen level, and relied on faith rather than works. Li’s efforts met with great success. Between 1992 and the end of 1994, he toured China, wrote and sold books, and built a nation-wide organization of followers that numbered in the tens of millions (Penny 2003).

Yet Li’s absence from China did not forestall criticism of Falun Gong, although qigong and Falun Gong continued t

Li Hongzhi surely hoped that his show of force would lead Chinese authorities to condemn police brutality and clear the way for the legal practice of Falun Gong. Instead, authorities took the demonstration as a major challenge, and over the course of the summer and fall of 1999 took a series of measures to brand Falun Gong as a “heterodox cult,” arrest its leaders, and disband its organization. Yet this proved easier said than done. Inside China, Falun Gong practitioners, many of whom were middle-class urbanites who had no sense of having been involved in “heterodoxy,” protested locally and in the capital. Outside of China, Falun Gong practitioners built web sites and button-holed politicians and journalists, claiming that their rights to freedom of religion and freedom of speech were under attack in China (Ownby 2003). This stand-off lasted until January of 2002, when five apparent Falun Gong practitioners set themselves on fire in Tian’anmen Square in the heart of Beijing. Although Li Hongzhi protested that these were not Falun Gong practitioners because suicide is not sanctioned in his teachings, the event proved to be a major public relations victory for China, as Falun Gong now looked very much like a “dangerous cult.” 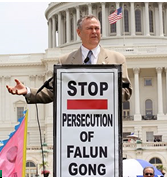 (the main sites are falundafa.org and en.minghui.org). They have pursued China’s leadership through the legal systems of various countries and through international institutions like the United Nations Human Rights Committee and the International Criminal Court. They have hacked into television programming in China to present their own version of the truth about Falun Gong. The Chinese government has responded to these efforts by continuing the campaign of suppression. Human Rights Watch and Amnesty International continue to report that Falun Gong practitioners are subject to arrest and torture; charges of organ harvesting of Falun Gong prisoners remain controversial, but are no longer dismissed out of hand.

One result of the long-running conflict is objectivity: it is virtually impossible to find unbiased commentary on Falun Gong. The Chinese government bears much responsibility for this; branding Falun Gong a “heterodox sect” left no room for nuance. But Falun Gong is not without fault either. Over the years, the public face of the movement has become increasingly militant, politicized, and defensive, developing a paranoid attitude toward non-practitioners that was not prominent in earlier years (Junker 2014).

On one level, Falun Gong beliefs resemble those of most schools of qigong: if one lives a moral life, and practices qigong under the guidance of an enlightened master, one can unlock the mind/body’s untapped potential and live a fuller life, free of illness, and perhaps achieve enlightenment or even immortality. Yet Li Hongzhi’s major text, Zhuanfalun, is a “new age” mish-mash of themes drawn from popular traditional Chinese spiritual discourse and parascientific theories, among much else. Li’s basic message is a variation on apocalyptic themes found in the “sectarian” texts of Chinese popular religion: the world has been destroyed and recreated many times, and only the “elect” survive the destruction to people the new world. Those who accept Li as their master will be saved. Li’s followers are to live lives of “truth, goodness, and forbearance” (zhen shan ren 真善忍), Falun Gong’s cardinal virtues, which are also meant to be the constituent elements of the universe (Ownby 2008).

pero Zhuanfalun dwells less on the apocalypse and more on man’s delusion and “attachments” as end-times approach. And much of Li’s discursive energy is directed at science, which he feels has led mankind astray. At the same time, Li does not so much denounce science as decry its shortcomings, as illustrated by his discussion of karma. In traditional Buddhist teachings, karma refers to the sum of good and bad actions performed over the course of a life, which in turn determines a being’s level of rebirth. Li Hongzhi argues that karma is black cellular matter in the body, inherited as the result of bad actions in previous lives, which can be transformed, through suffering (i.e., forbearance) and cultivation, into white cellular matter, which is virtuous. This is why Falun Gong practitioners should not seek medical care when ill. Illness is a form of suffering, which enables the practitioner to transform himself. Of course, martyrdom is a form of suffering as well, a theme that Li Hongzhi has emphasized repeatedly in th

e course of the conflict between Falun Gong and Chinese authorities. The messianic and apocalyptic elements in Li’s writings have become increasingly prominent in practice over the years (Penny 2012).

Li Hongzhi remains the supreme leader of Falun Gong. He built an extensive organization in China between 1992 and 1994, which has now been decimated (although underground “cells” surely continue to exist), and many Falun Gong leaders imprisoned. Outside of China, Li is supported by a number of practitioners, some Chinese and some Western, who form what appears to be his “kitchen cabinet.” The “organization” is mainly present on the internet and in Falun Gong media. Falun Gong has no temples or places of worship (and indeed does not consider itself a “religion”). It rents or borrows space (from universities, community centers, apartment buildings) for weekly or bi-monthly meetings. For larger-scale meetings, like the “Experience-Sharing Conferences” held every few weeks or months in important Falun Gong centers like Toronto, New York, or Chicago, practitioners contribute money to the rental of space in a university or a hotel. Much of the initiative for these activities appears to be local, and Falun Gong seems to be highly decentralized. Li Hongzhi occasionally appears, unannounced, at Experience-Sharing Conferences, but otherwise, his hand, or those of his close advisors, is not immediately apparent (Tong 2009).

Ipinilit ng Falun Gong na ang mga media outlet (ang Epoch Times newspaper and the New Tang Dynasty) are the work of local practitioners as well. Although local practitioners do provide much volunteer labor for these undertakings, and perhaps some financing as well, it is difficult to believe that such widespread and expensive projects do not receive financial help from the larger “organization,” whatever form it may have taken on.

Falun Gong’s major challenge is to defuse the conflict with the Chinese state, although this may not be up to Falun Gong. Above and beyond the fact that Falun Gong developed originally in China, and that many practitioners remain imprisoned or suffer from various forms of persecution and discrimination, the practice itself appears to have become increasingly shrill and brittle over time, as the themes of militancy, martyrdom, and anti-Communism have come to the fore. Although the millenarian undertones of Li Hongzhi’s teachings were not much in evidence in the early years of the movement, they are now. Some practitioners can talk about little aside from the end of the world. That this is largely the result of government’s campaign of suppression against the group is clear, but assigning fault does little to help the movement plot a future course.