From the first studies in the 1960s on the influence of Theosophy on key modern artists, such as Kandinsky and Mondrian, to well attended conferences in the twenty-first century, academia and the art communities increasingly realized new religious movements (NRMs)’s crucial influence on the visual arts. For the purposes of this project, religious and spiritual movements are broadly defined, including esoteric and spiritual movements that do not consider themselves as religious and broader currents of spirituality that do not necessarily constitute an organized “movement.” These movements start with the new Christian and esoteric groups of the eighteenth and nineteenth centuries, such as the Swedenborgians or Christian Science. For this project, visual arts include painting, sculpture, architecture, cinema, and contemporary performance art. The WRSP special project presents profiles of both movements that have produced their own significant art, or significantly influenced the visual arts, and individual artists in whose career connections with one or more movements, or with new spiritual currents in general, have played a key role. 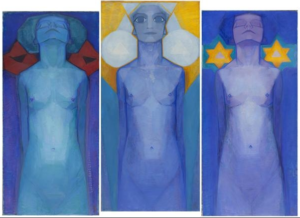 PERSPECTIVES ON RELIGIOUS AND SPIRITUAL MOVEMENTS AND THE VISUAL ARTS

“Religious and Spiritual Movements and the Visual Arts: An Overview”
Massimo Introvigne (CESNUR)

VALLEY OF THE DAWN (Vale do Amanhecer)

Legal notice: Efforts have been made to identify the copyright owners of the images reproduced on this site. For any further questions, please contact maxintrovigne@gmail.com.

Українська
WRSP offers automatic translations by Google Translate for text materials. Please note that original texts are published in English, and translations into other languages may not be exactly verbatim.