Zoroastrianism is one of the oldest religions in the world and is believed to be the first monotheistic religion. It was founded by Zarathushtra sometime between 1500-1000 BCE in Persia, present day Iran. This religion has had an enormous influence on Christianity, Islam, and Judaism not just in the fact that it is monotheistic but also the concepts of heaven/hell, god/satan, the soul, the virgin birth of the savior and many others. When Muslim Arabs invaded Persia many Zoroastrians escaped to India. India now has the largest concentration of Zoroastrians worldwide. Zoroastrianism teaches people to have good thoughts, good words, and good deeds. The Zoroastrian New Year is widely held on the vernal equinox (the first day of Spring) while other Zoroastrians celebrate August 20.

Currently there are only a few dozen Zoroastrians residing in the Richmond area. There are no formal religious observances being held at this time, but members of the community do gather informally to maintain ties and celebrate significant religious occasions. Zoroastrians held a celebration in Richmond at a neighborhood community center on the vernal equinox. 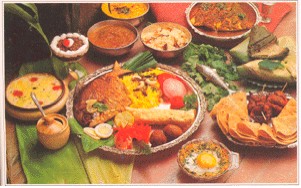 There were approximately 35 people at the celebration from Richmond and the surrounding areas. Some came as far as Charlottesville. Most of the people in attendance brought their entire family, young and old. Drinks mixed with pomegranate juice and fruit were served because pomegranate is an auspicious fruit. Most members of the community, in a potluck fashion, brought traditional Parsi food. When everyone had arrived the food was set on a table and everyone recited a traditional prayer that was said to translate roughly as, “Have good thoughts, good words, and good deeds.” After the prayer everyone helped themselves and then sat at tables enjoying the food and one another’s company. Time was spent catching up with one another. There are not many occasions where all of the local Zoroastrians come together; generally it is just the New Year celebration.

Profile prepared by Kalie Sneed
May, 2009