Saint Michael’s Episcopal Church is located in Richmond’s Bon Air area. The church originated in 1950 with the purchase of the land at its present location. The land was previously owned by a nearby Methodist church. The St. Michael’s congregation used the Bon Air Recreational Center across the street from the lot as a place of worship while construction of the church proceeded. The final stone was laid in 1954, and the church has become St. Michael’s permanent home. St Michael’s School opened adjacent to the church in 1957. The school enrolls 370 students enrolled in grades K through eight, and St. Michael’s chapel serves as the school’s chapel during school hours. The church has a congregation of approximately four hundred members, most of whom live in Bon Air, Chesterfield, and the Richmond metropolitan area. St. Michael’s is in the beginning stages of a 3.2 million-dollar capital campaign to renovate the church. Some of the work includes major interior changes, enlargement of the narthex, enclosing the space between the church and the parish administrative building, a new pipe organ, and a bell tower. The construction is expected to begin in August of 2008 and to be completed no later than Christmas of 2009. 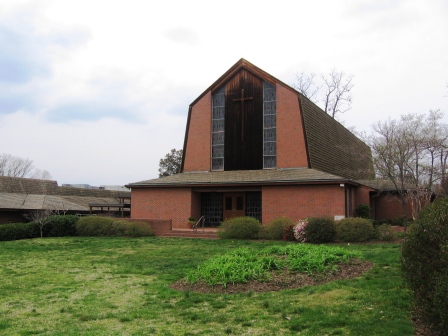 St. Michael’s states its mission as follows: “To nurture, teach, and grow in the image of Christ.” The church offers three worship services on Sundays. The first morning service is the Holy Eucharist-Rite I. That service is followed by the Christian Formation for all ages the Holy Eucharist and Healing-Rite II. There is also a Holy Eucharist service on Wednesday evening. In addition to services offered to adults, the church has events and services scheduled for children. There is Sunday School for children in grades Pre-K through five, and there is also a Children’s Chapel for children between the ages of 3 and 8. This service is offered during the second Eucharist, and it functions as an opportunity for children to explore the praise and worship of God through music and stories. The church also offers a nursery for infants.

The Eucharist serves as the principle act of corporate worship by the congregation, and all worshipers are encouraged to receive communion. Baptism is also an important part of St. Michael’s and is considered a sacramental act by which a person is “received into the congregation of Christ’ flock.” Both adults and children can be baptized in the church. In the case of children, the parents must be communicant members of St. Michael’s or another church, and they must also be prepared for the task of raising their children in the Christian faith. Confirmation is also an important part of church life at St. Michael’s. It serves as the rite through which a church member expresses a mature commitment to Christ. For adults who have not received the “laying on of hands” by a Roman Catholic, Orthodox, Lutheran, or Episcopal bishop, it is the means by which one officially becomes a member of St. Michael’s.

St. Michael’s has many outreach programs, and it considers volunteering in the community and service to others to be an integral part of church life. In 2005, for example, two hundred and thirty of its parishioners participated in outreach, and the church contributed $59,898 or 16 percent of the total budget to such programs. Some of the outreach programs of the church include Churches Around Richmond Involved To Assure Shelter (CARITAS), CCHASM, Freedom House, Bainbridge Community Ministries, and the Food Pantry. The CARITAS program involves the church serving as host each year to forty homeless men and/or women. This includes feeding and housing them for one week out of the year. The church provides assistance to the poor of the Blackwell area of Richmond by way of the Bainbridge Community Ministries through both financial and food donations. St. Michael’s also provides financial assistance to the Freedom House, which operates out of the Salvation Army building at the corner of Grace Street and Foushee Street, and a team of church volunteers serve a meal to the homeless on the second Wednesday of each month. In addition to local outreach, the church sponsors mission trips to other areas such as Southwest Virginia. For the last few years a group has traveled to help some of the less fortunate with projects and repairs around their homes. In 2007, a group traveled to Belize to volunteer at an Anglican school, and some of the projects included working with students, painting, and repair work.