St. Mary’s Episcopal Church started was established in 1878. The church’s name is associated with the brief life of Mary Mitchell Allen, who died less than a year after she was born in 1864. Her parents raised funds for the construction of a church on River Road. The congregation selected St. Mary as its patron saint, and the original church is called “Little St. Mary’s.” Adjacent to the church is a parish cemetery that dates back to the church’s founding. St. Mary’s launched a major construction project in 1992 that substantially increased its worship space. In 2002, the church added a bell tower and bells, a larger parish hall and kitchen, nursery and classroom space fo children, and a youth education building. The church established St. Mary’s Episcopal School in 2002 for young chilcren. Church membership now numbers about 1600. 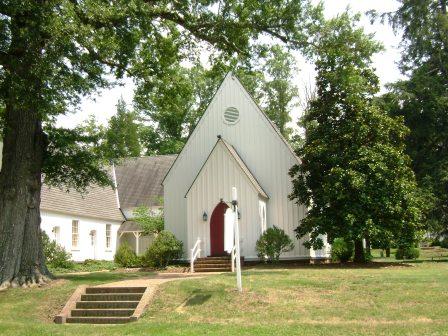 The worship style at St. Mary’s Episcopal Church is typical of many churches within the Anglican Communion. The church Rector states that “we keep the services here at St. Mary’s simple and traditional.” Along with teaching from the Bible, the services include The Book of Common Prayer, a text containing Anglican prayers and different types of services. Children and young adults are incorporated into the church’s choral music and services. There are more traditional Rite I and more modern Rite II services each Sunday morning.

The church is involved in a number of outreach programs. One of the most popular programs associated with St. Mary’s is the Free Clinic of Richmond. This program helps those who need medical care and who are not able to obtain health insurance. St. Mary’s Episcopal Church also works with the Congregations Around Richmond Involved To Assure Shelter (CARITAS) Program in helping the homeless, offering food and shelter to the homeless at various times during the year.