In 1937, Blanton Belk, a member of Grace Covenant Church in Richmond was expelled from the church due to his participation in the Oxford Group, a fellowship of individuals who sought intense religious commitments without regard for denominational ties. Four years after leaving Grace Covenant , Belk founded St. Giles Presbyterian in 1941. The current St. Giles was named after a Presbyterian church in Edinburgh, Scotland that was built by a monk who took a vow of poverty. The church has been in its current building since the founding of the church, but because of the layout of the church, large video screens were installed above the alter area. 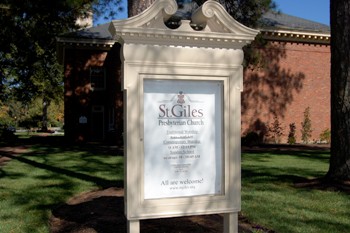 St. Giles has two main Sunday services. The first service in the early morning and is their traditional service. It consists of a quiet meditation, an organist prelude, a full choir along with usual prayers, sermons and offerings. The church also celebrates the Lord’s Supper every Sunday. The contemporary service is held later in the morning and consists of drums and guitar playing, praise music and personal conversational prayer. Sunday school is offered in between the traditional and contemporary services. Thanksgiving service is held on Wednesday evening, and St. Giles joins other congregations in the area to hold a large celebration. During the Christmas season St. Giles holds a children’s Christmas pageant and a Christmas musical open to the public. There are 600 members of St. Giles Presbyterian Church, with 300 regularly attending. The congregation is predominantly Caucasian, with a small number of African American members. 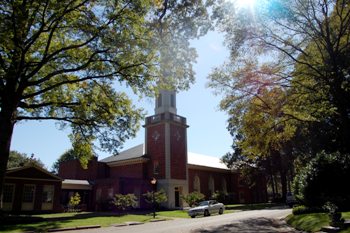 There are many internal groups within St. Giles. Moving On After Moving In is a group of women who meet one morning during the week to support those who are new to the Richmond area. Overall there have been over 300 members of this group, but at any given meeting there are about 30 women. The church also offers a stepfamily support group on a weekday evening and pre-marriage counseling. Alpha is another group that meets every week to learn more about the Christian faith. There are also many groups that meet at St. Giles, but are no affiliated, such as Boy and Cub Scouts and ballroom dancing classes. St. Giles regularly schedules trips to feed the homeless, partnering with the Daily Planet and setting up an area in Monroe Park to help hand out food or even cook hotdogs to feed the hungry.