“Zoroastrians believe that all people are born into this religion. Therefore, there is no baptism, only confirmation at a young age when the tenets are able to be said and understood by the person.” – Rumy Mohta

In 1986 Rumy Mohta opened the phone book. He started simply – by looking up Parsi names around the city and surrounding counties in the white page listings. More than twenty years later he has identified over fifty Zoroastrians in Richmond and the surrounding Central Virginia area. Through his community-minded outlook, a major focus in Zoroastrianism, he has become the de facto media liaison for Asian and Middle Eastern policy in Richmond; elected the chairman of the Asian-American Society of Central Virginia; appointed as the commissioner of the National and Community Service Board (by Governors Warner and Kaine); served on the Executive Board of the Indian Association of Virginia; been a member of the Virginia Museum of Fine Arts’ Multicultural Committee; lobbied for membership in the Interfaith Council of Greater Richmond; graduated from the Federal Bureau of Investigation’s Civilian Academy Course; and served on the Executive Board of the Filipino-American Association of Central Virginia (despite being of Indian descent). 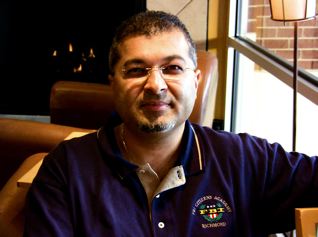 “I put people in contact with people. I don’t know why but I’ve become the 411; from ‘Hey, Rumy, I need a blender,’ to ‘I need this shipped to the UK .’ I believe the more you give out, the more you get back – but you can’t expect it to happen. I believe in going out and showing everyone who the Parsi people are.” – Rumy Mohta

Rumy Mohta was born in 1965 in Bombay , India . In the Indian school system, students are tested for their strengths before they enter the eleventh grade, where they follow a college-like major system for the eleventh and twelfth grades; students then can pursue a Bachelor’s degree in the following three years of school. Mohta attended the schools and graduated with a BS in Chemistry. He subsequently applied to several American universities and eventually found himself in Richmond studying at Virginia Commonwealth University ‘s Medical College of Virginia campus toward a Master’s degree in Chemistry in 1985. He chose the school, among other reasons, because he had a friend from his school days in Bombay already attending.

After graduation, Mohta took a job at Pharmaco developing new drugs for cardiac disease and later at the Medical College of Virginia labs conducting drug tests for Driving Under the Influence offenders and drug abusers. This lead to a job at Hoffman LaRoche in the Industrial Hygiene department testing air quality in the workplace to ensure a chemical-free environment.

In 1987, while he was still working in Industrial Hygiene, he started Richmond Travels, the first company of its kind to offer international ticket packages in Richmond . Travel could be customized to any kind of interest, such as authentic Italian cooking in the hills of Tuscany . This was his way of offering Parsi (Indian and Middle Eastern followers of Zoroastrianism) citizens a way to return to India in worship.

“It is believed that if a person didn’t support his community or his family enough, or generally didn’t do good with his life, the Tower of Silence offers the last opportunity to give oneself away to help someone or something else live after the person dies.” – Rumy Mohta

India houses the only remaining sanctuary in the world for departed Zoroastrians: the Tower of Silence . It is also the one place in the world that is regarded by Zoroastrians as worthy of confirming new followers; both of his children have made the journey to be confirmed there.

With Richmond Travels, Mohta was supporting his community in his own way, and also attempting to support the Parsi and Zoroastrian community around him. As his experience with the city and his Parsi contacts grew, fellow believers would meet in restaurants or at each other’s homes. It started slowly, and to this day there are only around 45 or 50 Zoroastrians in Richmond at a given time.

“I don’t believe there’s harm in praying to anybody. The more we pray, the better our lives will be.” – Rumy Mohta

Mohta’s wife is Catholic. Two summers ago an effigy of the Virgin Mary was passed around households in Richmond , and the couple hosted the religious relic. While his two children are confirmed Zoroastrians and his wife is Catholic, Mohta carried the Virgin Mary in a procession at Richmond Cathedral along with a ceremonial Filipino barong. He worships either at his house, in the few Hindu Temples around Richmond , or at Catholic Mass with his wife. They have prayed together at Hindu temples in southern India as well.

Rumy Mohta has single-handedly promoted and represented his faith in Richmond and Central Virginia . The oldest religion in the world, there are at most 130,000 Zoroastrians remaining today; 80,000 of them still live in India . Because of the unique characteristic of Zoroastrians having both a common race and faith, the religion is technically described as a dying belief system because of intermarriage limits the capacity of the group to reproduce itself.

Rumy Mohta represents a unique world religion – an influence in Christianity, Islam, and Judaism – to the utmost of his ability and to the expectations his faith places on him. His continued community and diplomatic service make him a bridge between government and diversity; Rumy Mohta is symbolic of the remarkable diversity of people and faiths in Richmond .