Alcoholics Anonymous was founded in 1935 by a New York stockbroker and an Ohio surgeon, both of whom had a problem with alcoholism. Dr. Robert Smith and Bill Wilson founded Alcoholic Anonymous in an effort to help others who suffered from the disease of alcoholism and to stay sober themselves. The spiritual aspect of Alcoholics Anonymous developed when one of the founders joined a sobriety organization called The Oxford Group, which was headed by Dr. Frank Buchman, a Lutheran minister. According to the American Heritage website, the group promoted Buchman’s belief in divine guidance: One should wait for God to give direction in every aspect of life (not just with respect to alcoholism or any other single problem) and surrender to that advice. Wilson initially was not receptive to this belief. Later, on a business trip in 1935, Wilson was struggling to resist having a have drink at the local bar. He looked in the phone book and called the local Oxford Group. According to the American Heritage website an Episcopal minister put him in touch with a woman whose friend, Dr. Robert Smith, was an alcoholic. Smith reportedly agreed to meet with Wilson for fifteen minutes but ended up talking with Wilson for six hours. Smith reported that he decided to quit drinking that very night. His wife then invited Wilson to move into their home for the duration of his stay in Akron, and the two men devoted their free time to the Oxford Group and educating other drinkers. 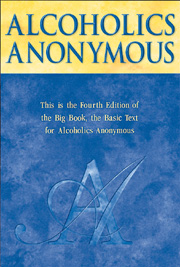 Alcoholics Anonymous practitioners base their practice on the now legendary “Big Book.” The book recounts the story of how thousands of men and women have recovered from alcoholism. Both the “Big Book” and the program make it clear that Alcoholics Anonymous is not affiliated with any religious group. In the “Big Book” the word “spiritual,” upon careful reading, refers to the personality change sufficient to bring about recovery from alcoholism. The book states that,” Most of us think this awareness of a Power greater than ourselves is the essence of spiritual experience. Our more religious members call it “God-consciousness.”