The Richmond Friends Meeting was established in 1795. The first Meeting House was erected at 19 th and Cary Streets in 1798, making it the second oldest church of any denomination in Richmond. The Meeting House was built by a member of the congregation, George Winston, who was a brick maker and builder. Winston patiently waited until 1816 before he received payment in full for the building. Reflecting Quaker values, Winston’s business practices were somewhat unique in that he did not make use of slave labor; instead, he hired and trained free blacks as his apprentices in the trade. He was also trustee of the Gravely Hill School for blacks. The Meeting House built by Winston was in use until 1862 when it was occupied by Confederate soldiers. For the next century, the Richmond Friends Meeting struggled to find a permanent home. The year 1867-1868 was spent at Springfield Hall at 16 th and M Streets, and then the Meeting moved to Foushee and Clay Streets where it remained for roughly 40 years. In 1909 the Richmond Friends Meeting was forced to move, and for the next twenty years met in the YMCA on Franklin Street. In 1929, the Richmond Friends Meeting purchased a building at 1804 Park Avenue, but soon found it to be too small for their needs. During World War II, meetings were held at Covenant Presbyterian Church. Between 1945 and 1953 Richmond Friends Meeting met at Tabernacle Baptist Church and again at the YMCA. In 1953 Richmond Friends Meeting once again secured property, this time at 2702 Grove Avenue; however, the building was sold in 1957 when the size of the membership exceeded fire code regulations. Finally, in 1957 a church building at 4500 Kensington Avenue was purchased from Colonial Place Christian Church. In 2004 the building was renovated and expanded to accommodate an educational building. 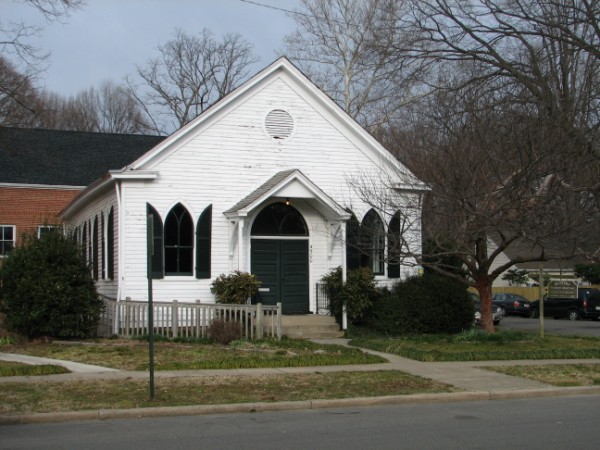 A typical Quaker service is largely silent. When moved by the Spirit, members may rise and speak words, simply and briefly, such as they are inspired. Richmond Friends Meeting holds services on Sunday mornings (known as First Days), with a twenty-minute session for singing in between. Nursery child care and “ First Day School” are offered for children, and a potluck lunch is held following the Meeting each fourth First Day. Richmond Friends Meeting is also the primary caretaker of The Clearing, a meditative retreat center located on a wooded site in Amelia, Virginia.

Quakers have historically supported a variety of causes, including racial equality and peace. The Richmond Friends Meeting has a long history of supporting both causes. Before the Richmond Friends Meeting was officially established, Richmond-area Quakers (many commuting to White Oak Swamp Meeting in Henrico) established the Virginia Abolition Society in 1790. The first president was Robert Pleasants, who was able to secure the freedom of over ten thousand slaves during his lifetime through various lobbying endeavors, petitions, and court battles. Pleasants Park in Oregon Hill is named for this remarkable figure. His son, James (a maternal cousin of Thomas Jefferson), later served as Governor of Virginia, 1822-1825, and was a staunch supporter of the rights of free blacks. The Society’s goal was the gradual abolition of slavery through both legislation and emancipation. The Society educated free and enslaved African Americans alike in the Virginia tradition of equality and belief that all men have inherent rights of freedom (a belief seldom applied to blacks by others who embraced it). In 1802, the Society of Friends in Virginia sent a Petition Against Slavery to the Virginia legislature. Among its signatories was Samuel Parsons, a prominent Richmond Quaker. In 1871, in response to the massive casualties of the Civil War, Richmond Friends Meeting sponsored and raised initial funding for the Friends Asylum for Colored Orphans (founded by a former slave). Today the organization is known as the Friends Association for Children and has expanded its original mission to provide family and child services to all of Richmond, including child care and career training. The organization is one of only seven Richmond organizations accredited by the Council on Accreditation. Just after the Civil War, Richmond Friends Meeting member Sarah Smiley, along with other Quaker women, established a school for newly freed African Americans, both children and adults. She was also insistent that it was not enough to simply educate and minister to African Americans, but that Quakers ought to share their houses of worship with African Americans as well.

As an historic peace church, the Richmond Friends Meeting affirmed a pacifist stance early during in the War of 1812. Most, but not all Quakers, were conscientious objectors to the Civil War (three members who chose to fight were amiably dismissed from the Meeting). During the first World War, Richmond Friends Meeting distributed peace literature in schools and sponsored a 1916 essay contest for schoolchildren on the subject “Why We Do Not Need a Large Increase in Our Army and Navy.” Relief money was sent to Belgians, English, Armenians, French, and Germans between 1914 and 1920. In 1916 Richmond Friends Meeting wrote letters to Congress and took out ads in newspapers opposing the war. In anticipation of World War II, RFM member Hoge Ricks met with draft-eligible Friends in 1940 to prepare them for the requisite testimony to attain conscientious objector status. Richmond Friends Meeting was opposed to the Selective Service Act of 1948. Several members served in Civilian Public Service Camps rather than take up arms. The Friends hosted the Vietnam Summer Project in 1967, a statewide program opposing the Vietnam War. The Richmond Friends Meeting has continued to oppose war, as well as the death penalty.