Kelly Dietrich uses her talent as a digital artist to create meditation aids. Since 2002, Ms. Dietrich has been “creating artwork that would assist in quieting the mind and allowing a deeper connection to the True Self.” While not an expression of any particular faith, her artwork is an expression of her belief that “Spirit runs through everything” and it is reflective of her desire to help others become “centered, grounded and present” in their daily lives through meditation. 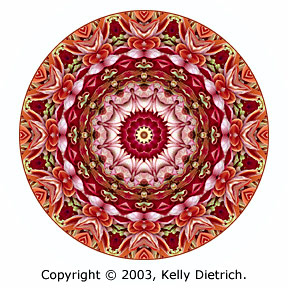 Ms. Dietrich creates three forms of meditative art: mandalas, fractal art and moving meditation art. Mandalas arose in the Hindu faith, but have been used in Christianity, Buddhism and Islam, as well as many indigenous faiths. Ms. Dietrich’s mandalas are generally made with repeating images of nature, such as flowers or leaves.

Fractal art rose out of fractal geometry, a mathematical method of studying shapes comprised of smaller, self-replicating shapes such as seashells and snowflakes. Ms. Dietrich found that the nature-images she used for mandals were equally suited for fractal art. She believes that using something reminiscent of nature, similar but not identical, significantly enhances meditation.

For those who wish to meditate using her artwork, Ms. Dietrich suggests that they start by finding an image that resonates with them, hanging in front of them or slightly below their eyelevel in the place where they mediate. In addition, the person meditating may want to keep writing instruments nearby, since sudden insights, artistic inspirations or gestalts are frequently generated by meditations. Ms. Dietrich recommends starting the meditation by consciously relaxing the body, then focusing on the image. The image should not be inspected, but rather a person should allow their vision to wash over the image or allow him or herself to be carried by the meditation into the image. A meditation can last as long as planned or a person can end when it is no longer comfortable to focus on the image, ending with a brief assessment of the spiritual value of the meditation.

Ms. Dietrich considers herself more spiritual than religious. In her childhood, she noticed that traditional faith she was being raised in seemed to elicit more fear in participant than peace. She was especially struck by the artwork present in the worship space; it seemed to always depict people engaged in some form of suffering. As much as she felt disconnected from the church, she felt deeply connected to and nurtured by her rural environment. Nature, to her, seemed full of positive energy and peace.

For the first decade of her adult life, Ms. Dietrich expressed herself through dance. She had always found herself drawn to visual art, but had never been able to connect through any of the traditional mediums. A few years ago, someone gave her an imaging program, and she found her medium. She quickly realized that she could do more than simply make beautiful art; she could create a tool to overcome her resistance to meditation.