January fifth marks the birth of Guru Gobind Singh, born Gobind Rai. His birthday on the Hindu Bakrami calender may fall either in January or December. He was born in Patna, Bihar in  India and became a guru on November 11, 1675, at the age of nine years, following his father Guru Tegh Bahadur. Guru Gobind Singh’s life and teachings have made a lasting impression on Sikh philosophy as well as in the daily lives of Sikhs. 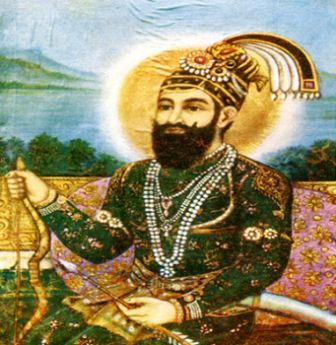 His establishment of the Khalsa (a strict Sikh religious order) is measured as one of the most important events in the history of Sikhism. According to Sikh history, the Khalsa formally began on March 30, 1699 when Sikhs gathered at Anandpur for the Baisakhi festival. Singh asked the assembled if anyone would offer their head to the guru as a sacrifice. Five men offered to make the sacrifice. Instead of conducting a sacrifice, Singh appointed the five as the first initiates of the Khalsa. Each adopted the surname of Singh and agreed to wear long hear (kes) a comb in the kes (kangha), a steel bracelet (Kara), short pants (kachch), and a sword (kirpan). They pledged to assist the helpless, fight oppression, have faith in god, and treat all individuals as equal. Singh then instructed his disciples to initiate him, making him both guru and disciple. He is revered as a leader of spiritual principles and an immense devotion to God. Singh was ultimately assassinated and died on October 7, 1708. Prior to his death Singh arranged for his authority to pass to the Guru Granth Sahib (the Sikh sacred scripture), thus ending the succession of human gurus. During this day of celebration, Sikh places of worship (gurudwaras), which are referred to as doorways to the guru, are wonderfully decorated with flowers and lighting displays. Sikhs file in procession singing lyrics of praises for their great leader and offer prayers for prosperity. They enjoy fellowship and common meals with their friends, relatives and visitors.