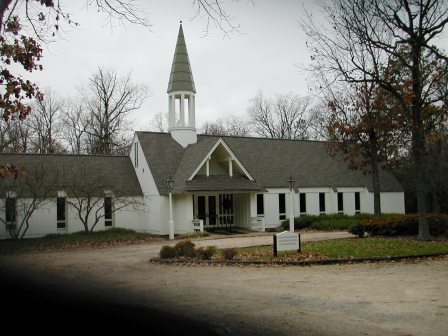 The Second Church of Christ, Scientist has a service every Sunday at 10 am. There is no pastor or any other ordained clergy; rather, the Bible and Science and Health with Key to the Scriptures serve as the pastor. The church elects two members every two years to serve as First Reader and Second Reader. The heart of the service is the Lesson-Sermon. This is prepared weekly by the Mother Church in Boston and relayed to each branch church. Therefore, with the exception of some scriptural and hymn selections, the service is identical to the one at the First Church of Christ, Scientist. During the Lesson-Sermon, the Second Reader reads verses from the Bible while the First Reader reads correlative passages from Science and Health with Key to the Scriptures. The Sunday service also includes hymns, silent prayer, reading aloud of the Lord’s Prayer, recitation of the Scientific Statement of Being, collection, and concludes with benediction. Sunday School is available during this time for those up to age twenty. There is also a Wednesday Evening Testimonial Meeting, beginning at 8 pm. This service is put together by the First Reader and includes testimonials from those who were healed and cured through Christian Science. Childcare is available at both services.

Associated Units
Each Church of Christ, Scientist establishes and operates a reading room, located within the community. The Second Church of Christ, Scientist runs a Christian Science Reading Room on West Cary Street in Carytown. Open to the public, this reading room provides a quiet and peaceful place for people to read, study, think, and pray. Visitors can sit, relax, read the Bible, the daily issue of The Christian Science Monitor or even borrow a copy of Mary Baker Eddy’s Science and Health with Key to the Scriptures. Other Christian Science Literature is also available for borrowing or purchasing. An attendant is always available in the reading room during the hours of operation to answer any questions.

Holidays and Festivals
The members of the Second Church of Christ, Scientist celebrate all of the traditional Christian holidays, primarily Easter and Christmas. How each of these holidays is celebrated is left to the discretion of the member. Thanksgiving is also regarded as a religious holiday and is commemorated every Thanksgiving Thursday with a church service.

Membership Size and Composition
While no official records of church membership are released, the membership size appears small with people of primarily European-American descent.