Ashtanga Yoga, or “eight-limbed” yoga, traces its roots back to ancient manuscripts found in the Yoga Korunta that are believed to have been compiled by the sage Vamana Rishi.  Rishi passed the manuscript down to Sri T. Krishnamacharya who eventually imparted them to one of his students, Sri K. Pattabhi Jois.  Jois is accredited with Ashtanga’s thriving existence in our world today and has been director of the Ashtanga Yoga Research Institute in Mysore, India since 1948. This particular practice of yoga revolves around eight tenets: yama or “ethical discipline,” niyama or “self-observation,” asana or “posture,” pranayama or “breath control,” pratyahara or “sense withdrawal,” dharana or “concentration,” dhyana or “meditation,” and samadhi or “freedom.” Each limb represents an essential part of this yoga practice; therefore, each limb must be individually perfected and nourished in order to progress righteously. Pattabhi Jois believes that “…if we practice the science of yoga, which is useful to the entire human community, and which yields happiness here and hereafter, if we practice it without fail, we will then attain physical, mental and spiritual happiness and our minds will flood towards the Self.”  This specific practice of yoga is similar to other practices in that it revolves around cleansing the body and mind of harmful toxins. Pattabhi Jois believes these poisons to be desire, anger, delusion, greed, envy and sloth. All of these deter one from achieving the psychological, physical, and spiritual refinement that is vital to the well-being of society. Through the eight-limbs of Ashtanga Yoga, one will practice various vinyasas (combining movements with breathing patterns) in order to cleanse oneself internally. Pattabhi Jois explains that “breathing and moving together boils the blood” and “makes it thin so it can circulate freely.”  With the blood being thin, it is able to move “through all the internal organs removing impurities and disease, which are brought out of the body by the sweat that occurs during this practice.” 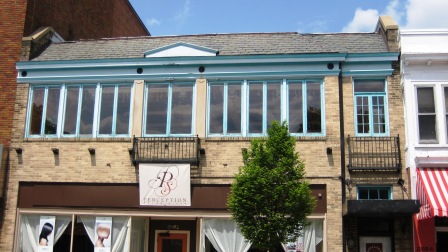 Ashtanga Yoga of Richmond was founded and is still directed by Alicia Golden, a wife and mother of two. Her love of Yoga, although not Ashtanga Yoga, began while she was pregnant with her second son and continued to grow rapidly thereafter. It was during her 200-hour teacher certification course that she came under the direction of Rob Miller and Jennifer Elliot who enlightened her to the depths of Ashtanga Yoga. Golden reports that she feels that it “has opened the door to a lifelong journey toward discovering her Truth.” She regards herself as privileged to have been able to practice under Sri K. Pattabhi Jois. 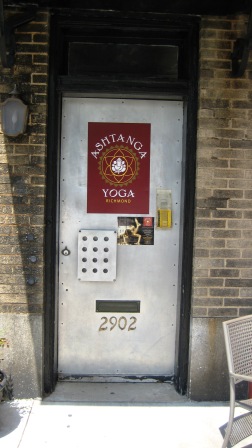 Golden’s passion for and devotion towards this way of life inspired her to open up the Ashtanga Yoga Center of Richmond in 2006. The center is located near the Byrd Theater in Carytown. She takes pleasure in popularizing his yogic beliefs through her teachings at the center. Golden is accompanied there by several other certified yoga instructors. The Ashtanga Yoga center here in Richmond offers an eight-week introductory class that teaches the foundations of Ashtanga philosophy, breathing and posture, three different levels of Ashtanga practice, as well as an improvisation yoga class.  Additionally, the internationally recognized Michael Hamilton, who was officially certified to teach Ashtanga Yoga by Sri K. Pattabhi Jois, offers a ten day teacher training program.

Profile prepared by John Feole
May, 2008