The Austin Organ at All Saints Episcopal Church


All Saints Episcopal Church is located on River Road in Richmond.  The organ that is currently in this church was built by the Austin Organ Company in Hartford, Connecticut. John Austin was born in England in 1869. During his childhood, he enjoyed choral singing and amateur organ building with his father. Austin emigrated to America in 1889 to try his hand at organ building. In 1893, Austin developed the innovative Universal Air Chest with its valve mechanism on the ceiling, allowing ready access for maintenance and adjustment. In 1889, he established his own company in Hartford, eventually partnering with his brother. The company quickly became one of the most prominent twentieth century organ builders. Austin Organ Company is one of the oldest continuously operating organ manufacturers in the United States. 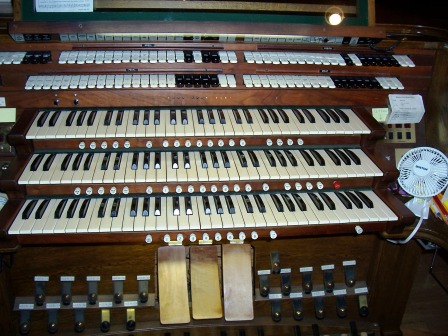 The Austin Organ at All Saints Episcopal church has been in place since 1967; it is in its original condition with the exception that the console was rebuilt in 2002. The organ at All Saints had a set of pipes located in the rear of the church, the Antiphonal Division, installed by the Austin Organ Company. The organ has six ranks with a total of 366 pipes. When combined with the pipes in the front of the church, there are 3,328 pipes in total. When the console was rebuilt in 2002, it was replaced with a solid state system, which includes 99 memory levels, four adjustable crescendo (climax) levels, a transposer (pitch), and MIDI (a language that allows multiple instruments to be connected and controlled by a single keyboard) . The organ consists of three manuals and pedals and 51 ranks. This addition created versatility and more reliability for the organist.

The organ requires substantial upkeep as it needs to be tuned at least twice a year. Regular tuning is necessary since the pipes shrink during the winter months and expand during the summer months. The organ at All Saints is tuned four times a year. Tuning is usually an all-day project that requires two people. One person stands by the organ to strike every key while the other person adjusts the pipes, pushing or pulling slightly the top metal part of the pipes.

All Saints Episcopal Church has guest organists once or twice a year. Tours of the organ are generally by appointment, and the organ may be heard at regularly scheduled church services.

Profile prepared by Sarah Chumney
May, 2008