Born on July 4, 1812, the Reverend John Jasper was a slave in Fluvanna County , Virginia , one of the largest slaveholding counties in the state. The youngest of twenty-four children by Philip Jasper, an oppressed Baptist preacher, and Tena Jasper, John Jasper was born two months after the death of his father. On his birthday in 1839, working in Richmond for the third time, Jasper walked through the Capitol Square “deeply convicted of his sins; and his distress of soul greatly increased…when he felt it was his duty to make a confession of his faith in Christ” (Archer 9). He convinced the African Baptist Church to allow him to preach the Gospel in 1840 despite having only seven months of grammar taught to him by fellow slave William Jackson. He left his first wife at the altar in Williamsburg and returned to Richmond , remarrying in 1844. By that time his reputation as an engaging preacher followed him around Virginia , creating jealousy among other black preachers because of the sizeable population of white people now following him. Several times his public speeches were disrupted by white “ruffians,” but he was also reportedly defended sometimes by white listeners. 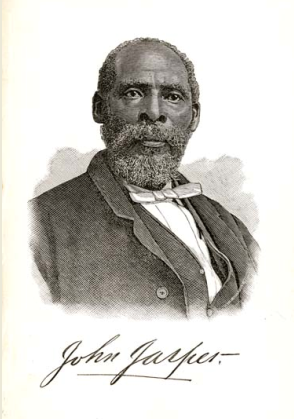 It was law in Virginia that no slave or black person could preach, even when he received funeral invitations to speak at the graveside of dead slaves by their white owners. This is the case with a plantation owner, Dr. Winfree. He invited Jasper to give a eulogy for some of his dead slaves. Jasper was faced with drawn guns and turned away from the property by order of the law. With Dr. Winfree powerlessly standing behind, the presiding justice of the peace told him he could not lawfully preach at the private funeral (Archer 14-16). Jasper became notable around Central Virginia for his funeral sermons in the years after the incident, preaching in different cities at the ceremonies of fallen slaves at the request of white preachers who would speak before him.

Late in the Civil War Jasper was asked to preach at the bedsides of sick and wounded Confederate soldiers. He was uninterrupted and untroubled despite the fact that he was African American (Archer 27). He then preached to the workers in the Rolling Mills until the fall of Richmond . His last sermon to the working hands was on April 2, 1865. Richmond fell the next day. As a free man after that, he had seventy-three cents in his pocket and owed $42 in rent. He was called by the Third Baptist Church in Petersburg to re-organize an African-American congregation and later by the black community in Weldon , NC to organize what is still to this day the First Colored Baptist Church of Weldon. Jasper returned to Richmond in 1866, and on the first Sunday in September, 1867 he created what would become Sixth Mount Zion Church in a wooden shanty on Brown’s Isle (Archer 31). As the population in his shanty grew, what was the third outgrowth of the Old African Baptist Church found a plot of land in Church Hill; Jasper then founded the Sixth Mount Zion Baptist Church on that plot (Archer 33).

Aside from his educational shortcomings and race, Jasper ignited controversy with his theory of the sun’s rotation, making him a pioneer among African-American and white thinkers and winning the attention of the world. He was invited to Washington , Baltimore , Philadelphia , and around New Jersey to share his theory of the sun: that the Earth is flat and (in Jasper’s own infamous words) “that the sun do move” (Archer 44). Jasper’s theory, however, was unique in that it derived entirely from the Bible – from Psalms to Jeremiah to Ecclesiastes – and his verbal prowess kept detractors at bay.

As the twentieth century was approaching, Jasper had experienced four failed marriages, jealous colleagues, and by that time worldwide ridicule of his religious assertions about the Earth and nature. His congregation of Sixth Mount Zion, by the time of his death, was at least one-third white and had swelled to the thousands (Miner). Jasper died on March 30, 1901, the same day the Jefferson Hotel was destroyed by fire. He is buried at Woodland Cemetery in Richmond .

“I have finished my work. I am waiting at the river, looking across for further orders.”
– The final words of John Jasper

Sources:
Randolph, Edwin Archer, b. 1854. The Life of Rev. John Jasper, Pastor of Sixth Mt. Zion Baptist Church, Richmond, Va., from His Birth to the Present Time, with His Theory on the Rotation of the Sun. (Electronic Edition)
(http://docsouth.unc.edu.proxy.library.vcu.edu/neh/jasper/jasper.html)
Miner, Nancy B., All The World Was Shoutin’: The Story of the Reverend John Jasper . Palmyra , VA
(http://www.blackandchristian.com/articles/academy/miner-06-03.shtml)