On Sunday, November 14, 1943, one hundred and seventy-five persons met in the chapel of Mr. J. Everett Price’s Funeral Home on Fifth Street in Church Hill to discuss the formation of a new church. The founders of the new church reported that the Holy Spirit had inspired this group to split off from the Mount Olivet Baptist Church and to seek the Lord’s direction in the formation of a new worship community. The new congregation immediately set about designating a spiritual leader. An invitation was extended to Reverend Freeman Roosevelt Berlack. The group then formed a temporary organization and elected officers, including Deacons, Trustees, Church Clerk, Treasurer, and Bible School Superintendent. People also volunteered their time, talents and finances in establishing the new church. Reverend Berlack, remembering a statement by President Franklin D. Roosevelt that read, “In the strength of Great Hope, we will meet our common cause,” named the church Great Hope. For Reverend Berlack and the congregation asserted that this name symbolized the faith and hope that they had in God and the future. 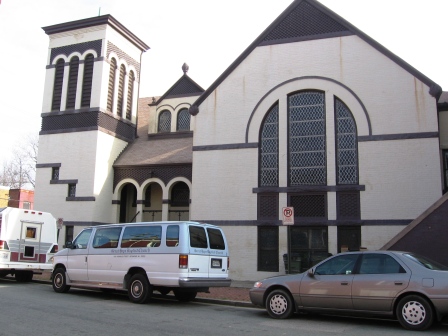 On January 22, 1944, a church edifice was purchased from the Church of Nazarene congregation for seven-thousand dollars. By June, 1944, Great Hope had achieved permanent recognition and was formally organized as Great Hope Baptist Church. This recognition was based on sixty-two organizational letters received from Mount Olivet Baptist Church, which are now stored in the church’s archive. Around this time Pastor Berlack was unanimously elected Pastor for life, and within three years the mortgage for the property was previously been occupied by the Venable Street Baptist Church. Great Hope established a child day care program and other programs to help the community such as a soup kitchen and shelter for the homeless.

Great Hope has two morning worship services on Sunday. Both worship services are essentially the same in form. First, there is the Call to Worship, during which a prayer is read. Next is the Invocation, during which members come to the front to receive prayer. This is followed by the Invocation Response. The Lord’s Prayer is read, followed by the singing of a Hymn of Praise by the choir. There is then a Period of Fellowship during which members greet one another. A Moment of Reflection is followed by announcements. An Offertory Prayer and Offering is presided over by the church deacons, and during this time members can donate money to the church. The Period of Meditation and Prayer consists of a reading from scriptures, followed by a Hymn of Preparation. The pastor then gives a sermon, which is followed by a Invitation to Discipleship in which non-members are invited to join Great Hope and members are encouraged to make confessions of faith. There is a Hymn of Invitation, and the service ends with Benediction, which consists of a short invocation for divine help, blessing, and guidance.

In addition to the two morning worship services, there is a Bible study on Sunday morning, and throughout the week there are other activities. During the middle of the week there is Bible study and then a prayer service. The choir also gathers during the week to rehearse, and a youth group also meets. Great Hope is involved in the One Church One Child Program, which is an adoption program for foster children. They also participate in the CARITAS Program, which provides shelter for the homeless in the church, and they have a Feed the Hungry outreach program.