Pancha Ganapati, which originated in 1985, is the five-day Winter Solstice celebration for Hindus and is observed from the 21st through 25th of December. During this time Hindus pray to Ganesha, the elephant-headed, five-faced, four-armed God. Pancha (five) refers to Ganesha’s five faces, each of which represents a particular type of shakti (power) representing a specific power. One face is worshiped on each of the five days. Ganesha is worshiped as the Remover of Obstacles, and the festival symbolizes new beginnings and starting over. 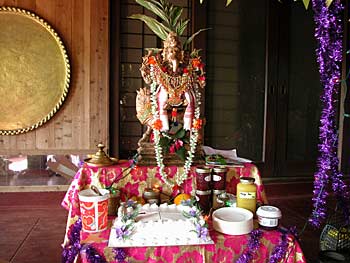 During the festival, a shrine is created in the main living room of the home and decorated in the spirit of this festive occasion. At the center of the shrine is an elaborate murti (statue) of Lord Pancha Ganapati that is decorated with numerous ornaments and garments. Each morning during the festival, fruits and sweets are presented to Ganesha. Every morning the children of the house add a new color to the statue, each with its own significance. On the first day, the color yellow is added to the statue, which signifies love and harmony within the family. Family members sit together, seek to repair strained relationships, offer one another amends and forgiveness, and relate the good qualities the each possesses. On the second day, blue is added to the statue, which signifies the relationship families have with their neighbors. On 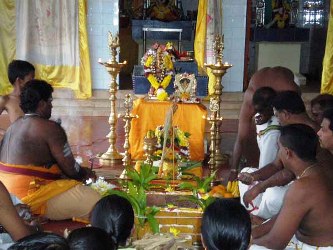 this day, families present gifts and food to their neighbors as a sign of love and respect; apologies and made and forgiveness sought for misunderstandings that may have occurred. On the third day, red is added, representing the love and respect individuals have with their business associates. Gifts are given to employers, employees, customers, and business partners; debts and disputes are settled. On the fourth day, green is added to the statue, representing the art and music the family enjoys. Gifts are again exchanged. Gifts from the previous four days remain unopened and are placed in front of the statue. On the fifth day, the large number of gifts in front of the statue symbolize the amount of love that each individual receives and Ganesh’s grace. On the fifth and final day, orange is added to the statue and represents the combined love from the first three days.