(Video of the Garba dance at Navatri)

Navratri is the Festival of Dance and Worship in Hinduism. It is celebrated over ten days and nine nights during which different forms of Shakti (the female divine force) are worshiped. Like most other Hindu festivals, the dates on which Navratri is observed are determined by the Lunar calendar; celebration occurs in the Hindu calendar month or Ashwin, which corresponds to early October. There are numerous regional variations in the way that the festival is celebrated and in the events that take place. On the first three days, the goddess Durga is worshiped; this ritual is believed to remove devotees’ impurities and sins and make them clean. On the second three days, Lakshmi (the goddess of wealth) is worshipped for her power of blessing devotees with unlimited wealth. The final three days are spent worshipping Sarasvati, the goddess of wisdom. 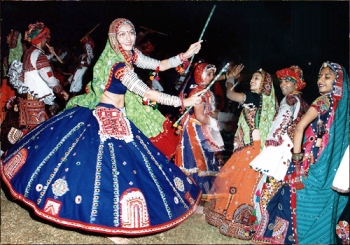 Traditionally, Navratri is celebrated with Garba, a dance that originated from the Gujarat state in India. Participants move in a designated motion with a wooden stick in each hand, clapping them together as they move from dancer to dancer. Participants eventually complete the circle and return to the position from which they started. The dance usually lasts for several hours and is performed on two nights during the festival. Navratri celebrations involve numerous bright colors and candles and lavish decorations.