Makar Sankranti is a festival celebrated in the southern region of India during the lunar month of Poush, which corresponds to January. Similar to Lohri, it begins the harvesting season for farmers 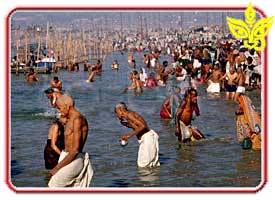 and is celebrated at the end of the Winter Solstice. This festival is significant to Hindus because it serves as a transition between the six months of light (Rama, or Heaven) and the six months of darkness (Ravana, or Hell). Makar Sankranti also pays homage to Saraswati, the goddess of knowledge and art. On the day before Makar Sankranti, those celebrating the festival go through their homes and throw out everything which is old and has lost meaning, getting ready for the transition to a new season and new things. Families give gifts to friends and neighbors as a sign of love.