Mahashivaratri (the night of Shiva) is a Hindu festival celebrated in the lunar month of Phalguna, which corresponds to February or March. Lord Shiva is worshiped during this festival for saving humanity. During the churning of the ocean) by both gods and demons, a toxic poison was released that threatened to wipe out both humanity and the gods. The gods beseeched Lord Shiva, on the advice of Lord Vishnu, to protect their lives by ingesting the poison. Lord Shiva agreed to drink the poison, but its effects were so potent that Chandra (the Moon God) intervened and placed a cobra around his neck to cool the effects of the poison. It was as a result of this experience that Shiva assumed a blue color. 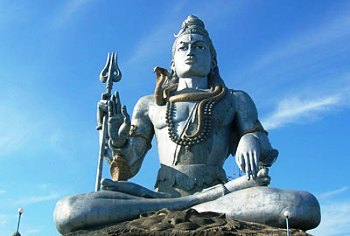 The festival is celebrated by Hindu’s, who fast for the whole day and attend temple and pray in honor of Lord Shiva. They offer bael leaves, along with food and sweets to Lord Shiva as a sign of love and respect (it is also seen as very auspicious), and maintain a vigil that lasts through the night. Hindus often draw three white lines on their foreheads with a paste, symbolizing spiritual knowledge, purity and penance as a sign of respect for Shiva as well. The purpose of the festival is to receive positive energy and karma for meditation.