Kumbh Mela is a festival during which Hindus make a pilgrimage to sacred locations in India. Hindu legend states that at one time the Gods lost their strength. They believed churning the Ocean of Milk 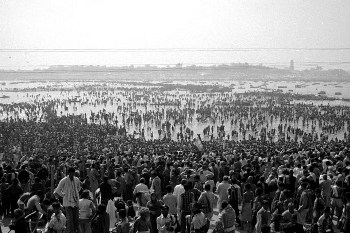 would give them amrit (the nectar of life) that would help them regain their powers. In order to accomplish this goal, they needed the assistance of their enemies, the demons of the world. In return for the demons’ help, the Gods agreed that they could share the amrit equally. However, when the amrit appeared, the Gods and demons fought over it in the sky. It is said that four drops of amrit spilled and landed on four different spots, Allahabad, Haridwar, Ujjain and Nashik.

The event occurs four times every 12 years, and the sites that Hindus visit rotate between Allahabad, Haridwar, Ujjain and Nashik. Ever 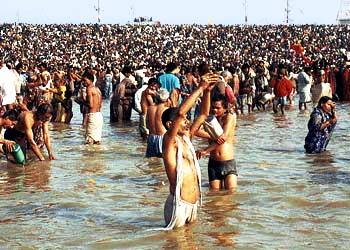 144 years, there is what is known as the Great Kumbh Mela, and in 2001 60 million Hindus journeyed to Allahabad, making it the largest gathering anywhere in the world. It is part of the ritual that those that travel bathe in the waters of the river of each city. The festival also consists of eating food that is even given to the poor, singing of songs, and religious discussions.