Diwali, also known as the Festival of Lights, is a festival celebrated by India’s various religions 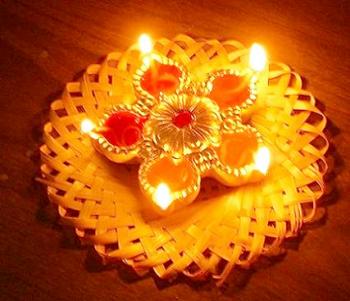 (Hinduism, Sikhism, Jainism, Buddhism) and is a national holiday. It is the largest and most widely celebrated of the Hindu festivals. The meanings attached to the festival vary by region. In one version the festival is celebrated on the date when Lord Rama came home after fourteen years of exile and victory over Ravana, the villagers put candles and lamps in their houses to light up the city in honor of his return. The tradition continues in a more contemporary form as people continue to display lights in their houses and set off firecrackers to commemorate Lord Rama’s return. They light small clay pots filled with coconut oil and a cotton wick, known as diyas. Diwali is a celebration of humanity’s true nature, the infinite, immanent, eternal reality (Atman) that transcends the mortal human being. Awakening devotees to this inner light brings out expression of love, compassion, unity with all of creation as well as a sense of joyfulness. 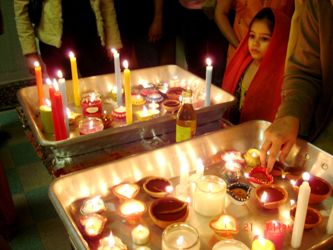 The festival spans five days festival that starts at the end of the month of Asvina and the beginning of the month of Kartika, usually between October and November. The first day is devoted to worship of the sacred cows and calves. The second day is regarded as very auspicious for shopping, particularly for gold, silver or utensils. The third day is a celebration of the day that Narkasur, an evil demon who had imprisoned sixteen thousand young princesses who he planned to marry, was slain by Lord Krishna. The day begins with ritual bathing before sunrise. The fourth and fifth days do not the same type of focus and significance as the previous three days.