In 1906, a group of Christian men and women decided to meet at the home of Sister M.C. Waller at 1007 West Leigh Street to organize a Sunday school called the Sixth Mount Zion Mission. The individuals responsible for the start of the mission included Rev. James H. Williams, Mr. John Moseley, and Mrs. M.C. Waller. The Sunday school grew rapidly, and within a few months the members then decided to purchase a small church that was located on the corner of St. James Street and Fritz Street in a section of Richmond called “Burying Ground Hill.” At the time this church was the property of Mt. Carmel Baptist Church. A meeting held during Sunday school to decide to organize a church. The individuals responsible were Reverend and Mrs. James Williams, Brother and Mrs. Charles Tompkin, Brother and Mrs. William Gardner Sr., Brother and Mrs. John Mosely, Brother Robert Jackson, and Mrs. Addie Johnson. During the meeting Mr. Charles Thompkins suggested the name Trinity Baptist Church. The pastor and the members agreed. The request for this mission was granted on August 6, 1906. Reverend James H. Williams was named the church’s first pastor. After serving for a several years, the church called on Reverend Pritchard to succeed him. In 1913 the church’s congregation grew so rapidly that it became necessary to build a larger church. A location was obtained on St. Johns Street and Fells Street, which later became Rose Avenue. The cornerstone was laid for the new church on April 20, 1917. In 1967 the current church was erected on Fendall Avenue. On the third Sunday of October, 1967, the Trinity congregation marched from Rose Avenue to the new church on Fendall Avenue. The current pastor, Reverend Lincoln James, brought to Trinity the theme, “Pastor and People, one in spirit, seeking a more Excellent Way.” 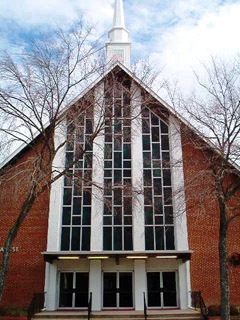 The Trinity Baptist congregation is ninety five percent African American; a small number of non-African Americans attend worship services on special occasion. When Trinity Baptist was first established in 1906, the congregation consisted of six members. In the last one hundred years the church as grown to approximately 2,500 members and is still growing. The average attendance for a Sunday morning worship services is approximately around 1,000.