Trinity Lutheran Church was established in 1956 by 43 founding members as a mission congregation on Richmond’s West End. The founders decided that the West End of the city would be an ideal place to spread the word of God to both Richmond’s urban and suburban residents. The Church was officially chartered in April, 1957. At that time all that existed was a two-and-a-half acre lot at Parham and Lansdowne Roads, close to current intersection of Interstate. Although plans for the architecture of a church building were formulated in August of 1957, actual construction did not commence until the mid-summer of 1969. It would take workers nearly a year to complete the structure. Prior to the erection of the Trinity Lutheran Church, services and Sunday school were held in the auditorium of the Ridge School. During the fourteen years between Trinity’s conception and the construction of the house of worship, the church membership grew from 43 members to 127. Recently Trinity Lutheran Church celebrated its fiftieth anniversary and is in the process of enlarging its facilities. 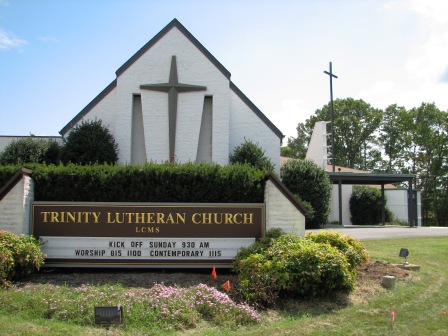 The Trinity Lutheran congregation is made up of approximately 1,100 members. It hosts about 375 members during Sunday services, and approximately twenty percent of these are children. Its members are primarily Caucasian, though it also has members who are African-American, Indian-American, and Asian-American. Members are predominantly forty-five years or older.The church provides services mostly to people from the western Henrico area, though it also has membership from Powhatan, Manakin Sabot, and Mechanicsville. Trinity Lutheran offers its members two different types of services: traditional and contemporary. The former is a standard worship service early on Sunday mornings. The contemporary service is held later on Sunday morning and is a modernized service that incorporates advanced technology and contemporary guitar music. Power Point presentations are often used during these worship services. Online sermons are available as well. Although this is generally considered to be a more contemporary and modern service and is one of their fastest growing services, it tends to attract more of its older membership.

Children’s activities at the church include Sunday school, Youth Action Group, preschool, Choristers, and Youth Choir. Children can also register for Power Lab, a vacation Bible school/camp, the purpose of which is to discover “Jesus’ Miraculous Power.” A monthly publication, Kidz Korner, is available to the children of the Church as well. It serves to inform them of recreational activities and provides suggestions for healthy spiritual growth and development

Outreach programs are also very important to Trinity Lutheran’s staff and congregation. The church is actively involved with many social service organizations such as Habitat for Humanity, Helping Hands, Saint Joseph’s Villa, the Micah Program, and Meals on Wheels. Trinity Lutheran congregants routinely take part in shut-in visits to church members who are confined to their homes. Members also spend time assembling food baskets for under-privileged families within the community and assisting in local schools. A recent program in which the church is involved is called Riches in Richmond, which started in the early 2000’s. This program consists of youths from various Lutheran churches all over the country who come to this Richmond church for one week. During this time they are housed and fed in return for the work that they do. This work consists of the youths embarking with senior church members on projects to areas of low-income or poor housing in order to provide charitable home improvements for people in need and people who are living in run-down homes. Trinity has even been involved in international outreach by offering aid to the poor in Guatemala.

Profile amended and expanded by Cory Chubb
May, 2008