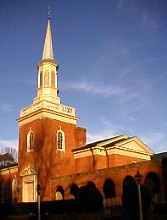 The Trinity Methodist Episcopal Church constructed a new church building at 20 th and Broad Street, which featured Italian architecture. The church built a 225 foot slender spire steeple in 1873 that became a Richmond landmark. The Trinity landmark steeple survived storms, blizzards, and hurricanes until 1954 when it was damaged by Hurricane Hazel. It was torn down in 1955.

Dr. Joseph T. Mastin was a very instrumental individual in the emergence of the Trinity Methodist Church. Dr. Mastin served as pastor of the church when he formed the Virginia Board of Charities creating social awareness in Virginia in 1895, the Methodist Orphanage in 1899, and the Goodwill Industries in Richmond in 1921. The Trinity Methodist Church was the center for social services in Richmond during the mid 1920s and by 1938 fifteen Methodist Conference welfare agencies were operating in Greater Richmond.

In 1945, The Trinity Methodist Church moved to the corner of Patterson and Forest Avenue and on September 16 th the first service was attended by 58 members. The building was named the Trinity Chapel, and by 1955 the present brick building was completed, with the cornerstone being laid in October of that year.

The congregation consists of primarily middle and upper middle class families of all ages, and most members are of European descent. The church pastors are Reverend John B. Peters, Kathy Gochenour, and Judy C. Oguich. The Trinity congregation is supported by a large staff, which administers the following programs: children and youth ministries, p reschool, music ministries, and monthly newsletters. The church also is actively involved with many local outreached programs. These include music, youth and children ministries, educational schools, nursery, and preschool. The church contributes to the support of Habitat for Humanity, Congregations Around Richmond Involved To Assure Shelter (C.A.R.I.T.A.S.), Refugee Family Help, Auction for United Methodist Family Services (UMFS), and the worldwide missionary of the United Methodist Church.