Thomas Jefferson was born in what is now Albemarle County on the Shadwell Plantation to Peter Jefferson, a planter and surveyor, and Jane Randolph, a woman of prominence in Virginia. His personal belief in public schooling as the keeper of a Republic was manifested in his Monticello library – the largest personal collection in the United States by 1815. He also designed the State Capitol in Richmond based on the famous building Maison Carrée in Nîmes, France, with the assistance of French architect and antiquarian Charles-Louis Clérisseau. The Virginia capitol was the first public building in the United States designed in the neoclassical style. Thomas Jefferson died on July 4, 1826. He was 83. 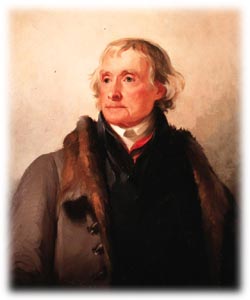 Jefferson carried his own chair to the Albemarle County Courthouse, a forum that welcomed preachers of different denominations to practice. His own familial religion was undoubtedly rooted in the Church of England. Though no records of his baptism exist, he was to become – in one biographer’s account – “ the most self-consciously theological of all America’s presidents.” Religion “mesmerized him, enraged him, tantalized him, alarmed him, and sometimes inspired him.” His own beliefs stemmed from Jesus’ morality in the New Testament. Defined as a “restorationist,” Jefferson took scissors to his copy of the New Testament, removing the prophecies and miracle stories of Jesus’ “biographers.” Believing Jesus to represent a God of reason, not irrationality, he kept the ethical teachings and parables, ending his interpretation with the death of Jesus. Protestantism is a form of Christian restorationism, an attempt to restore the faith once delivered by Jesus to its original purity. Protestants believe external forces have added false doctrines to His original teachings. There has been an ongoing scholarly argument that Paul’s letters took Christianity in the wrong direction. Jefferson excised those influential passages along with the Book of Revelations.

In his run for presidency in the year 1800, Alexander Hamilton, along with Congregationalist clergy, smeared Jefferson’s campaign with the assertion that “Christians would be forced to hide their Bibles as well as worship in secret” if he were elected. This was a result of Jefferson’s many letters to friends describing and stimulating the theological argument he personally faced. He opposed established churches, writing that “millions of innocent men, women, and children, since the introduction of Christianity, have been burnt, tortured, fined, or imprisoned…” Jefferson also wrote in a chapter on religion in his book, Notes on the State of Virginia, that “it does me no injury for my neighbour to say there are twenty gods, or no god.”

Despite his strong opinions, Jefferson left the care of his children to the Episcopal Church; his funeral was presided over by an Episcopalian priest. He was, however, married to Martha Skelton Wayles by an Anglican clergyman, and recorded the births, deaths, and marriages of St. Anne’s Parish in his father’s Anglican prayer book. His impatience with dogmatic arguments within the religion never stopped him from contributing to the building funds of Episcopal, Baptist, and Presbyterian congregations. He fundamentally believed all religion was rooted in some kind of general morality.

An enigmatic dichotomy arises when, between 1770 and 1780, Jefferson served as a member of the Board of Visitors for his alma mater, William and Mary. He felt Christian coercion was too deeply embedded in higher education, specifically the Anglican-Episcopal ethos pervasive within the educational structure. He worked to successfully abolish divinity professorships as well as the divinity school itself, instead substituting professorships in science and law. The influence was still too deep for his tastes, however, forcing him to leave and eventually form his own Deistic university, the University of Virginia . This was a unique institution in the history of this country because it was a Deistic university without either a religious curriculum or a chaplain. Despite his enigmatic turns both for and against organized religion, historians categorize Thomas Jefferson as a Unitarian and a Deist. Although he designed Charlottesville ‘s Episcopal church, the city’s Unitarian church bears his name. This Unitarianism stems from Jefferson’s personal conclusion that having a trinity existing as both singular and separate was “incomprehensible jargon,” a “metaphysical insanity.” In one of Jefferson’s historian’s words: “[His] religion was monotheistic, restorationist, reason-centered, Jesus-centered, anti-medieval, anti-Calvinist, anti-clerical, and combative toward mystery. A reformer in religion as well as in politics, the founder of a major university he hoped would become a beacon of the Enlightenment, an American who believed he had separated the gold from the dross in government and religion, Jefferson wanted to tear down what he considered false to allow what he considered true to shine through.”

Thomas Jefferson co-authored one of the most important pieces of legislation on religion in American history. With James Madison he wrote the Virginia Statute for Religious Freedom, prohibiting the establishment of religion by the state (a tradition reminding many Virginians of what they regarded as English Anglican tyranny), and stipulating that religious preference be entirely voluntary. The legislation also prohibited state taxes to underwrite religious institutions, including the churches both Madison and Jefferson attended. This legislation became part of Virginia ‘s constitution and has been replicated in numerous other state constitutions. More significantly, the legislation laid the foundation for the religious clauses in the U.S. Constitution’s Bill of Rights. For his epitaph Jefferson did not choose to be remembered as a president of the United States or for any of the other high-ranking positions he held. Rather, he opted to be credited for three things: being an author of the Declaration of Independence, founding the University of Virginia , and authoring the Virginia Statute for Religious Freedom.