The Catholic Virginian began as “Knights of Columbus,” a publication for the Catholic men’s organization in the 1900s. It later became “The Virginian Knight,” was taken over by the Catholic diocese, and was renamed The Catholic Virginian. The paper, now located on Carousel Lane, is published biweekly and serves the people of the Catholic Diocese of Richmond. Circulation is approximately 73,000. The newspaper emphasizes diocesan news with a balance of national and international news of interest to Catholics. The paper states its mission as follows: “To help meet peoples’ needs for information that they may better live out the Gospel of Jesus Christ and to support their understanding of themselves as a believing community.” There is a subscription fee for those not members of a diocesan parish. 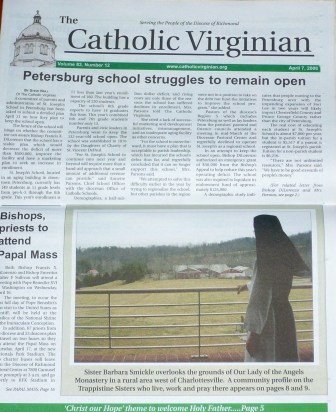 The newspaper has three columns: “Believe as you Pray,” “Family Ties,” and “In the Light of Fear.” Believe as you Pray addresses different aspects of belief and how one can live by faith. It is written by three different, alternating authors. Family Ties is written by syndicated columnist Mary Hart from North Carolina. It discusses the Catholic family from a religious standpoint. In the Light of Faith considers matters of faith in general.

The newspaper also incorporates articles, letters, shortakes, opportunities, an “around” section, and an editorial page. The articles in the newspaper report Catholic news from all over the world. There is a letters to the editor section that publishes responses from readers. The shortakes consist of news from different parishes that are published at no charge. The opportunities section has paid advertisements and job advertisements for available positions in the church. No secular jobs are advertised in this section. There are also sections for local news and national news. The Hispanic Apostolate is one page of Catholic Hispanic news written in Spanish. It discusses religion, Catholic events, and other matters. The editorial is written by the editor who includes in this section whatever he considers “noteworthy.”