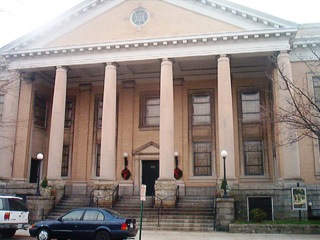 Although it originally was a member of the Dover Baptist Association, Tabernacle Baptist Church joined with other churches in the area to form the Charter Member churches of the recently created Richmond Baptist Association in 1951. Tabernacle Baptist Church was the second largest church in Virginia by 1952; however membership began to decline in the 1960s as the population began to suburbanize. On March 17, 1974 the church voted “To remain at the present location, with intensification of programs toward winning for Christ the unchurched of the Fan district and the larger inner city.” By 1989 the church began to see a net membership growth in membership, a pattern that has continued through the present.

In addition to Sunday worship services and Sunday school, Tabernacle Baptist Church offers programs for children, youth, music and social outreach. There are both vocal and handbell choirs for all ages, as well as private music lessons offered. The church also participates in distributing food baskets to families in need at Christmas and also offers a food pantry and clothes closet. Tabernacle offers a Wednesday night fellowship dinner followed by Bible study.