On December 26, 1811, a major fire started on stage at a Broad Street theater, trapping many box-seat holders inside. Seventy two persons died in the fire, including Governor George W. Smith. It was decided to build a memorial church on the site of the theater, where the victims had already been buried. The memorial church, Monumental Church, opened its doors for the first time in May, 1814. 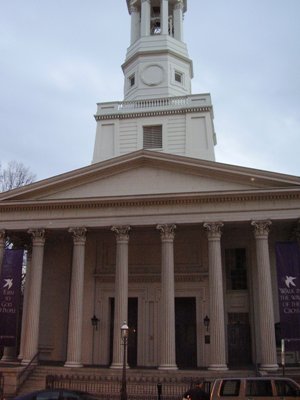 By 1843 the congregation was starting to outgrow the church, and so a lot was purchased on Ninth and Grace (at the time known as “ G Street”) Streets. A total of 67 members of the Monumental congregation had pledged $32,290 (equivalent to approximately one million today) toward purchase of the lot and the building of the church. St. Luke’s Church of Philadelphia was selected as the model for the church, and Thomas S. Stewart, the designer for St. Luke’s, was hired as the architect. St. Paul’s was admitted into the diocese at the May, 1844 Diocesan convention. Sixteen years after the church was admitted into the diocese the Prince of Wales, later King Edward the VII, attended services in the church on October 7, 1860.

St. Paul’s Church Home for Orphans was established by an act of the Virginia General Assembly in 1861. This program is notable for in 1862 during the battle of Fredericksburg 12 children were displaced in an Episcopal orphan asylum in that city, St Paul’s Church Home took them in for the rest of the war. The children of St Paul’s church home for a long time lived in a house at 506 E. Leigh Street owned by the church. However in 1928 due to the rise of foster homes the vestry decided that the physical home be closed, but the corporate “home” should be continued for “the care of children in general child welfare work”. This independent cooperation, the Church Home Board, still exists and in resent years has disbursed money to more than 100 children and adults in need.

During the Civil War General Robert E. Lee and his wife attended St. Paul’s services as they were loaned a pew by Major David N. Walker. Confederacy President Jefferson Davis also made regular appearances at the church, and in May, 1862 he was baptized at the White House of the Confederacy and was confirmed at St Paul’s by Bishop Johns. The marker on Davis’s pew, the Davis window, and the Davis bronze tablet on the west wall of the nave reflect the chief executive’s impact on the parish.

While the war was in progress the church contributed to the war effort. The women of the church tended to the wounded brought to St Paul’s after major battles near Richmond. The clergy also did its part by working to meet the spiritual needs of the soldiers. Many Marriages (General John Pegram and Hetty Cary’s wedding in 1865) and many funerals (John Pegram’s just three weeks after his wedding) were performed at St Paul’s during the war. At the 1862 convention it was reported that there had been 40 funerals in the church since the previous meeting. On April 2, 1865 President Davis received a telegram from General Lee during one of St Paul’s services announcing withdrawal of Confederate forces from Petersburg and the “consequent necessity for evacuating Richmond.”

After the war ended St. Paul’s went through many changes including reconstruction and rebuilding. In 1890 and 1904 the building underwent significant internal and external modifications. Enlargement of the chancel and the erection of the churches first stained glass memorial windows were some of the most dramatic changes made in the 1890s. Several of the windows, the Davis and Lee windows for instance, were clearly reminders of the “lost cause.” At this time the organ was moved to the chancel and the Tiffany Mosaic reredos of the da Vinci’s “The Last Supper” was installed above the alter.

The changes after the war were not simply asthetic; the church community was changing as well. On April 8, 1925 St. Paul’s held the funeral of Robert Damell, who had been a “buffalo soldier” (Ninth Regiment of the U.S. Cavalry) in the Southwest and was later a first sergeant in the Tenth Regiment of the U.S Cavalry in Cuba. Damell’s fellow African-Americans sat downstairs, while white mourners sat upstairs. The African American Minister, Junius Taylor of St. Philips Episcopal Church, assisted Mr. Tucker in the services. The funeral was held in honor of Damell’s eighteen years of service as St. Paul’s sexton.

During World War I the church prided itself in being able to respond to times of disaster or trial, as it has since that time. St. Paul’s established a group of “Christian solders” who were organized into several “regiments.” Some “troops” participated in war saving stamp and liberty loan drives, while others helped with the united war work campaign and the Red Cross. The depression and World War II elicited similar responses. St. Paul’s hired a social worker to its staff who gave guidance to children and in some instances help in getting higher education, attending summer camp, or finding new living arrangements. More then 180 members of the congregation served in the armed forces, and ten lost their lives in the line of duty. A Servicemen’s Club of St. Paul’s was founded to welcome many of the approximately 34,000 people in the nation’s service who visited Richmond on the weekends.

Following World War II, the church underwent further significant changes. Two buildings were purchased in 1958 on the east side of Eighth Street for $40,000 to serve as the new parish hall and garage. Only the three story Wallerstein Building at the corner of Eight and Grace Streets now was not owned by St. Paul’s on the northern half of the block shared with the Federal Reserve Bank of Richmond. The Wallerstein building was purchased shortly thereafter by Elizabeth Scott Bocock and donated to St. Paul’s as a memorial to her parents. In the 1950’s St. Paul’s social services committee distributed Christmas checks and baskets, paid bills for needy people, helped students obtain a collage education, sent children to summer camp and assisted people in other ways. In 1971 construction for the underground parking garage began. Revenue from the garage made possible another kind of outreach, the Isaiah 58:12 Program, which helped to fund the Fulton Medical Clinic and a special school for drop outs, the Richmond Street Academy. Responsibility for the academy was transferred to the Richmond public schools a few years later. St. Paul’s was also heavily involved in the Urban Institute formed in 1979 to promote interracial dialogue among Richmonders, although Sunday morning services still tended to be mostly segregated.

There were new developments in the 1980s. On Art Awareness Sunday in 1985 a memorial garden was opened to provide a special opportunity for people to pay tribute to loved ones. In 2005 the Garden Committee developed a plan that accommodates the burial of ashes and the placing of memorial plaques in the garden. Cremated remains of members of the parish and their immediate families are eligible to be interred in the garden for a fee. One cup of the deceased ashes is placed in perimeter planters, and the memorial plaques are placed chronologically next to the planters at the four corners of the garden. In 1989 St. Paul’s underwent further renovation as the parish house was extended and a new organ was purchased. By Thanksgiving of 1992 the construction was complete and the parish house reemerged as a truly new space. The changes in the building included an atrium with a skylight-covered interior courtyard (creating a space usable year-round), an enlarged lobby or gathering space, improved offices for staff, hideaway offices on the second floor for use by community groups, and a new elevator from the garage to the first and second floors. 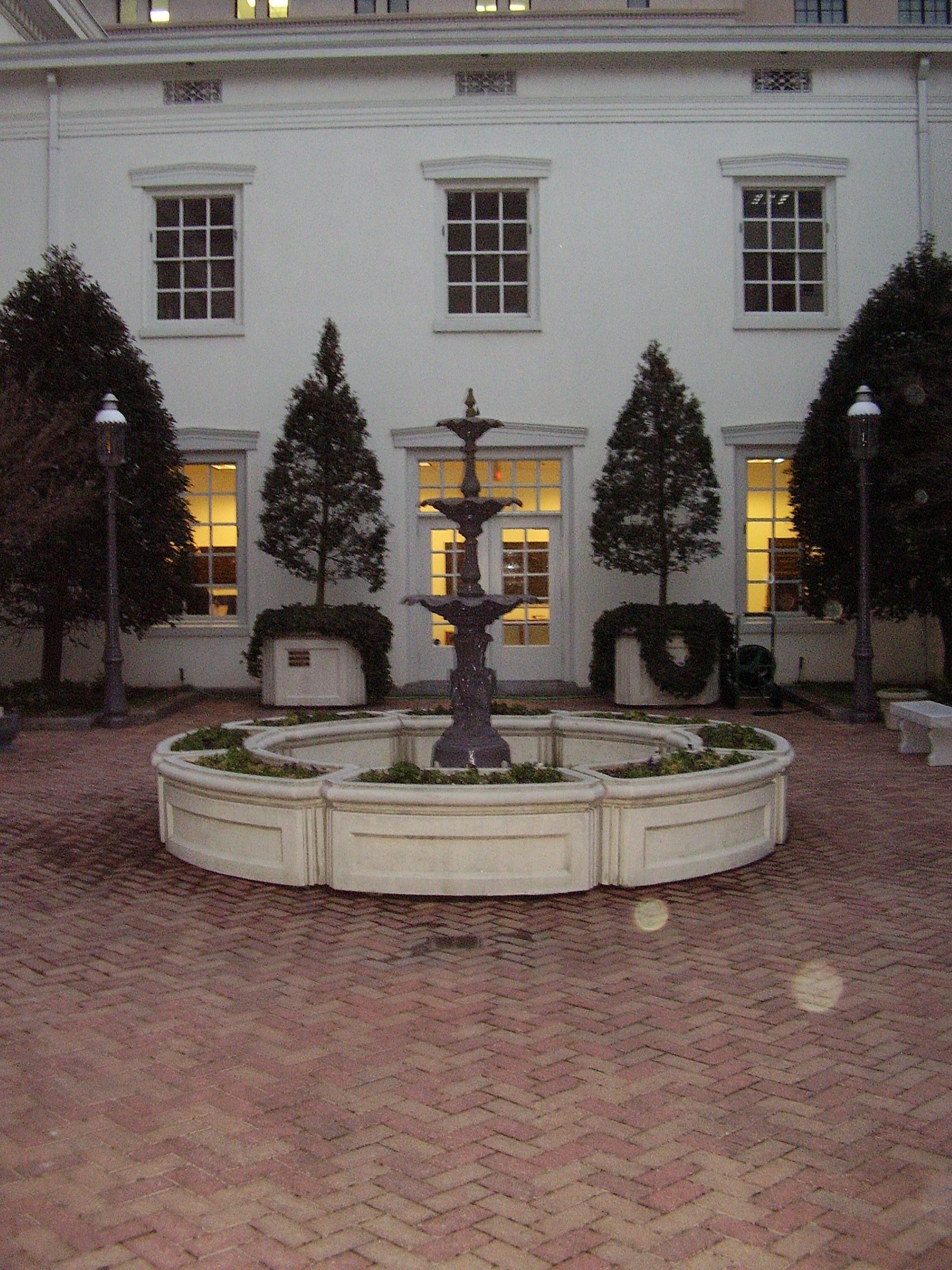 St. Paul ’s current outreach activity consists of the Micah Ministry, a partnership with Woodville Elementary School, and an on-site ministry for the homeless and working poor on Thursdays. These ministries grew out of church task forces that emphasized the importance of the church’s role in providing transforming experiences through relationships. The Outreach Ministry Board also oversees Transformational Grants and is alert to emerging volunteer opportunities. For instance, in addition to hosting CARITAS, St. Paul’s volunteers participate with other faith communities to build a House of Faith through Habitat for Humanity. Through Eyes on Richmond, the fall forum series, and Jazz Lunches during the Easter season, St. Paul’s offers a lunchtime ministry to those who work in the city. St. Paul’s has also developed close relationships with other organizations in the city through mutual community involvements. These groups include Richmonders Involved in Strengthening Communities (RISC), Virginia Interfaith Center for Public Policy, Hope in the Cities, and Richmond Hill Spiritual Retreat Center.

St. Paul’s offers a wide choice of services on Sundays. The early morning service features a contemporary style, with guitar, piano, flute, bass, and piano music. The latter morning service is traditional, with full choir and organ. A Eucharist service celebrated in the chapel Services is offered on weekdays.