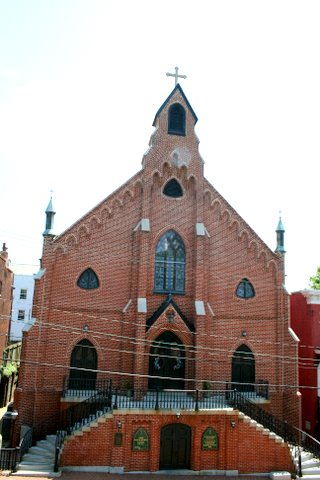 On November 11, 1860 St. Patrick’s Church was consecrated. Irish immigrants built St. Patrick’s in the late 1950’s. Many Irish immigrants lived in the eastern part of Richmond and worked in the tobacco factories. The Catholic community was growing, and the eastern part of the city of Richmond was in need of a Catholic church. Prior to the consecration of St. Patrick’s, masses were held in various places: members’ homes, warehouses, and the “Sailors Chapel” (a small building near Rocketts Landing).

The first pastor of St. Patrick’s was Father Teeling, who became notable for his defense of privileged communication. Father Teeling heard the confession of a woman prior to her death. She had been brutally wounded by her husband, John Cronin. Father Telling was called to testify and give information from Mrs. Cronin’s confession. The defense hoped that the confession would reveal alleged infidelity and justify Cronin’s jealous rage. Father Teeling refused to reveal her confession, based on the confidentiality of confession to a priest. Judge John A. Meredith of the Richmond Circuit Court’s ruled that “any infringement upon the tenets of any denomination is a violation of the fundamental law, which guarantees perfect freedom to all classes in the exercise of religion. To encroach upon the confessional, which is well understood to be regarded as a fundamental tenet in the Catholic Church, would be to ignore the Bill of Rights, so far as it is applicable to that Church. In view of these circumstances, as well as of other considerations, connected with the subject, I feel no hesitation in ruling that a priest enjoys a privilege of exemption from revealing what is communicated to him in the confessional.” This ruling became known as “The Teeling Law,” which preserves Sacramental Confession in courts of law.

Mass is celebrated every Sunday morning, followed by a social gathering. There are approximately two hundred members of St. Patrick’s Church, and over ninety-five percent are Caucasian; about ninety percent reside outside the immediate area of Church Hill. St. Patrick’s Church sponsors the Irish Festival annually the weekend after St Patrick’s Day. Thousands of people come to join in festivities that include Irish musicians, bagpipers, Irish food and drinks, rides and games for children, Celtic vendors and local crafts. The Irish Festival is a main source of income for St. Patrick’s Church. St. Patrick’s also hosts the Almost Annual Irish Open. The proceeds from this tournament also help to support St Patrick’s Parish and its outreach programs. The funds also help support the historic preservation of St. Patrick’s. The church 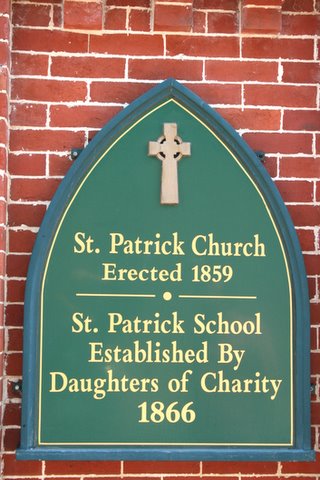 takes part in the Celtic Festival hosted by the city of Richmond.