St. Joseph’s Home for the Aged

In 1873, James Gibbons, Richmond ‘s fourth Roman Catholic Bishop, called on a mendicant order of nuns, the Little Sisters of the Poor, to open a much-needed hospital for the elderly. Six members of the order arrived in Richmond On October 13, 1874, including their Mother Superior, Sister Virginia. Upon their arrival, the Little Sisters first set up the St. Sophia Home of the Little Sisters of the Poor at Marshall and Ninth Streets. As a hospital and home for the elderly, St. Sophia’s was open to “poor, aged, white persons” and soon became pressed for space. As a result, Bishop Gibbons purchased a property known as “The Warsaw,” located at Harvie and Floyd Avenues, in 1877 to better suit the growing needs of Little Sisters. The Warsaw had been previously owned by Mary Gilmer and her Presbyterian-minister husband, George Hudson Gilmer. In the 1970’s the Sisters were forced to leave this facility because it was unable to pass state regulations and fire codes. It was then that the Little Sisters were able to raise sufficient funds to move to their current location, which was given the name St. Joseph’s Home for the Aged. 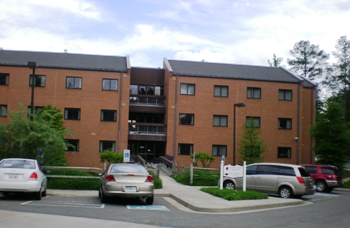 St. Joseph’s Home for the Aged offers the options of independent living, assisted living, and nursing care at the facility. The main building can accommodate up to seventy-two residents. In addition, the Jeanne Jugan Pavilion for Independent Living, which was added in 2002, can house an additional twenty-four residents. Over 6,000 of Virginia’s elderly poor have been cared for at this facility. St. Joseph’s Home for the Age pride itself on providing care for residents physical, social, emotional, and spiritual needs.

one-on-one visits by a staff of more than 50 volunteers. Residents are given the option of experiencing a variety of religious and spiritual activities at St. Joseph’s. There are daily prayers and group rosaries as well as a weekly Protestant service and Catholic Mass. Residents can participate in Bible studies, choir and religious themed plays. Ministers also frequent the home to visit with residents on an individual basis.

Profile prepared by Julie Miller
May, 2009