The Kingdom of Armenia was the first state to adopt Christianity as its religion in the early years of the 4 th century. Since the Christian faith has played a major role in the history and identification of the Armenian people, and the church’s goal in the U.S. is to bring Armenian people together so that they can recapture the historic, cultural, and religious heritage that many have left behind. St. James Armenian Church is the only Armenian Church in the Virginia area. 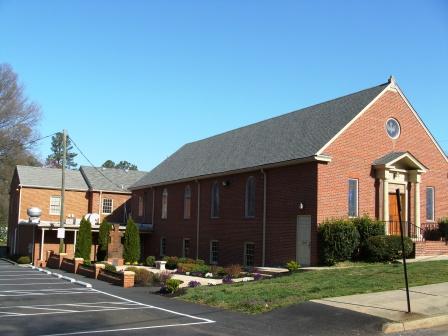 The St. James Armenian Church was first organized on September 9, 1956 as a way to bring the Armenian people together and to provide a place to worship. Even though this church is not built in the classic Armenian style, which usually consists of a central dome in the middle with bells and also a cross-shaped architecture, it does reflect the Armenian religions tradition. The church alter faces the East, which reflects the church’s belief that the second coming of Christ will be from that direction. Another indication of the tradition is found in the stone crosses that each have a unique architectural design. Each cross has green leaves around it, but does not display the body of Christ as it is intended to symbolize new beginning and the power of the resurrection.

St. James Armenian Church holds church services for an hour to an hour-and-a- half on Sunday morning. Additional services are held during feast days, such as Christmas and Easter. There are about 40-50 people in attendance on average; most are Armenians, but some members attend because of integrated marriages. The service is primarily delivered in the Armenian language, but there sometimes are gospel readings in English to accommodate those who are non-Armenian. 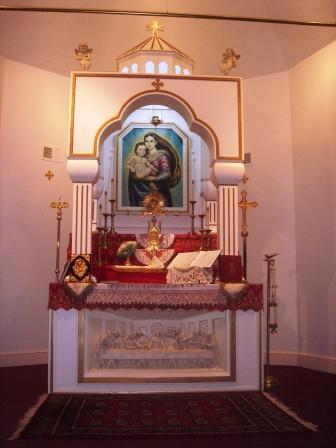 St. James sponsors a variety of programs. The church runs a Sunday school that follows the worship service and offers members an opportunity to learn more about their faith. St. James supports the men’s and women’s council, which is an organization that works on the Armenian Festival. This festival has been going on annually for about fifty years. It is a 3 to 4 day event that visitors not only from the Virginia area, but from across the U.S. This is the church’s way to showcase Armenian culture and traditions and also to raise funds for its services. The men’s and women’s councils play a major role in making this festival possible by coordinating the event and by cooking, dancing, and singing.

The church is also involved with organizations like the food bank, and members participate in food and clothing drives for the community.