St. Edwards Catholic Church is located on Huguenot Road in the Southside of Richmond. Planning for the church began in 1957 in response to a growing demand for a new place of worship in the community of Bon Air. St. Edwards resulted from a division of the Sacred Heart Church on Perry Street. Construction began in 1959 and included a church building, a parish center, and a school which serves students up to the eighth grade. The main goal of the church in the early years was to establish a school. In 1961 this goal was accomplished, and the school opened its doors to the first group of students. 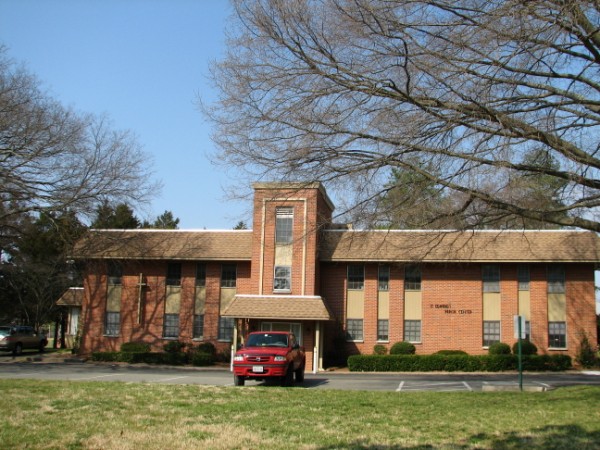 Since 1961 the church has undergone many changes from new buildings to an expansion of the parking lot. A recent renovation replaced all of the churches stained glass windows. The interior of the chapel also received a makeover with brighter colors, new lighting fixtures, new carpet, and an emphasis on the baptismal font. The altar was expanded and a large crucifix has been placed behind the alter. The school also underwent many changes. There is now a gymnasium and new classroom space in a new building attached to the church. This addition also provides a meeting place for a variety of groups, such as the Boy Scouts and the Knights of Columbus. The property also includes a soccer and baseball fields as well as a recreational area for children.

The congregation of St. Edwards Church consists of approximately 3,000 families and is quite diverse as Hispanic, Philipino, and African American membership has grown. Weekly services are offered on Saturday afternoon and several times on Sunday. A typical service begins with a precession that includes a welcome to the attendees. A scripture reading is then followed by an offering of prayer. The communion is prepared and distributed. The church choir performs at various times throughout the service. Donations may be made during the service.

All major Christian holidays are celebrated at St. Edwards. One holiday that is unique to the church is known as Feast Day. This holiday takes place in October and is observed to pay tribute to St. Edward the Confessor. St. Edward was the king of England from 1042 to 1066 and is considered a saint by both the Roman Catholic Church and by the Eastern Orthodox Church. In the Roman Catholic Church Edward the Confessor is the patron saint of kings, difficult marriages, and separated spouses. From the reign of until 1348 he was considered the patron saint of England, and he has remained the patron saint of the Royal Family.

St. Edwards is host to many different outreach programs, including Harvest of Hope, Habitat for Humanity, and CARITAS. The Harvest of Hope involves members in helping to can corn in Ashland, which is used for a food bank. Habitat for Humanity involves members in helping to build homes for the needy in the community and abroad. During the week of Christmas the Church participates in CARITAS and opens its doors to the homeless to provide food and shelter. The church is also home to a chapter of the Knights of Columbus, a Catholic organization dedicated to the principles of charity, unity, fraternity, and patriotism. Some notable members of the society include John F. Kennedy, Samuel Alito, Associate Justice of the Supreme Court of the United States, and Jeb Bush, the Governor of Florida and brother of President George W. Bush. In 1954, lobbying by the Knights of Columbus helped to convince the U.S. Congress to add the phrase “under God” to the Pledge of Allegiance.