In 1851 the Jesuits founded St. Mary’s Catholic Church, a German speaking parish located on East Marshal Street. The Jesuits returned to Georgetown University in Washington D.C. in 1860, and a Benedictine priest arrived from St. Vincent’s Abbey in Pennsylvania to provide pastoral care for the congregation. At the Benedictine pastor’s invitation, three Benedictine nuns came from St. Mary’s Pennsylvania in 1868 to re-open St. Mary’s Parochial Sschool on Fourth Street. 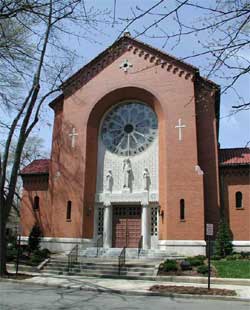 St. Mary’s Catholic Church experienced a drastic decrease in parish size and school enrollment after 1890 as families began moving out of the downtown residential area. This development led to discussion about creating a “new St Mary’s,” which was to become what is now known as St. Benedict’s Catholic Church, in what then was Richmond’s far West End. Although he agreed to the building of a new St. Mary’s Catholic Church, the bishop stipulated that the existing St. Mary’s could continue to hold services to support the German congregation.

The entire block of property bounded by Stuart Avenue and Hanover Avenue and Shepherd Street and West Street (later named Belmont Street) was purchased to construct the military high school known as Benedictine College. The high school began admitting students in September, 1911. The school building also served as the new parish building, and services for St. Mary’s Catholic Church were held in the school library. The parish grew rapidly in the next few years, and by 1917 the chapel was moved to the auditorium. After thirteen years in temporary living quarters in the high school, the priests moved into a brand new priory in 1924. Shortly after the completion of the priory, planning commenced for a new church building.

Construction of what is now St. Benedict’s Catholic Church began in 1928. The architect was Fr. Michael McInerney, a Benedictine priest. His design began with a traditional Latin cross-shaped nave and transept that soared up to a lofty ceiling. The interior of the church was designed with the single objective of directing all attention to the alter. No artificial materials were used in constructing the building. St. Benedict’s Catholic Church was dedicated in 1929. There were a number of subsequent additions. In 1932 the Stations of the Cross were installed. Although it was wartime and there was a shortage of materials as well as money and labor, stained glass windows were installed in 1946. The arched ceiling mural in the Sanctuary of the Sacred Heart was completed in 1957. The mural depicts Christ above Mary and Joseph. St. Benedict is depicted below in the center of the mural along with four doctors of the western world. Life-sized statues of the apostles at the last supper, as a semi-circular arc enframing the main alter, also was completed in 1957.

St. Benedict’s Catholic Church is very concerned with liturgical expression that is faithful to the discipline of the Catholic Church, catechesis that is faithful to the Magisterium of the Catholic Church, Apostolic Outreach to care for the less fortunate and vulnerable, and parish life rooted in support of the family. Consistent with these commitments, St. Benedict’s offers Ministers of Holy Communion to the sick, Post-Abortion Healing (located at Mary, Mother of the Church Abbey in Goochland County) retreats which provide a safe place to renew, rebuild and redeem hearts following an abortion; Little Sisters of the Poor (which support St. Joseph’s Home for the Aged by means of an annual collection and by the gifts and volunteer services by the pastor and parishioners); nursing home visitation; financial and volunteer support for St. Francis’ Home (located on Richmond’s Southside, which provides care for aged, infirm, and disabled residents of limited means); and support for St. Mary’s Hospital. St. Benedict’s is also involved in homeless outreach by serving, on average, 175 meals, three days each month, in association with Richmond Friends of the Homeless. Each year at Epiphany, St. Benedict’s Parish begins their mid-winter clothing drive. They collect blankets and articles of warm clothing that members of the parish distribute directly during the night to those in need on the streets. In August of each year St. Benedict’s Parish partners with Boulevard United Methodist Church in the CARITAS Family Focus program by providing overnight shelter, showers, and meals for up to twenty people for one week. St. Benedict’s is also involved in many pro-life activities, including a Sunday speaker series, crisis pregnancy outreach, post-abortion healing, and l egislative action.

Prepared by: Laura Katherine Palin
May, 2007