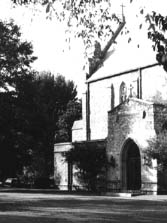 In 1911, St. Stephens Episcopal Church was conceived when a group of newly settled families, many with young children, in the Westhampton area of the city, then considered “the country,” recognized the need for not only a place of worship, but also a Sunday church school. The building site for a chapel to seat 200 on the north side of Grove Avenue east of Three Chopt Road was purchased in 1910 for $1500. The church leaders approached the Bishop Robert Gibson, who gave his blessing to the project.

The first service in the red brick chapel now known as Palmer Hall was held in July 1911. Ten months later St. Stephens Church was accredited by the Diocesan Council as an independent congregation. At its first congregational meeting in 1912. In 1911, the Ladies Guild was formed with 14 members and in 1916 a branch of the Womens Auxiliary was organized.

On May 14, 1927, the cornerstone of the current gothic style stone structure was laid, and on Sunday, March 18, 1928, the first service was held in the completed church. Several additions have been made to the original facility to accommodate the changing needs of the growing parish. In 1938, the red brick parish house, connected to the rectory and to Palmer Hall, was built. In 1950, the nave was lengthened by two bays, the west entrance was created, and the Patriots Window was enlarged. The north aisle was extended to create the Chapel of the Good Shepherd.

More property was acquired to provide for the construction of a parking lot and a new Parish House joined to the main church by cloisters. This new building was dedicated on October 13, 1957.

Worship
There are four worship spaces: the nave, two attached chapels and the original nave. The nave seats about 450 comfortably. The Good Shepherd Chapel seats about 130 and is used for the 8:00 a.m. and 5:00 p.m. Sunday services and a Thursday healing service. The Chapel of the Holy Spirit seats about 50 and is used for smaller occasional services. The original nave, now called Palmer Hall, has been remodeled into a large open space with chairs which can seat approximately 200.

According to the churchs profile report, four services are scheduled in the main church each Sunday from September through May. All services at St. Stephens are taken from the Book of Common Prayer with slight modifications for childrens services. The 8:00 a.m. service is attended by 70 to 90 people. The 9:15 a.m. service is often described as a family service and attendance usually runs about 300 to 350. The 11:15 a.m. congregation numbers about 175 to 200, mostly over age 60. The 5:00 p.m. service is Rite II Holy Eucharist and is casual in celebration and dress. Attendance is about 30 people. One Sunday each month during the school year, a youth-led contemporary service, the Family Inclusive Youth Service, is held at 5:00 p.m. in Palmer Hall for the young and young at heart. This service includes contemporary music, youth-led worship and provides a place for our young people to express themselves in music, dance and other forms of worship.

Outreach
Outreach grants totaled $183,000 in 2002 and $150,000 in 2003. The Outreach Committee annually reviews grant requests from dozens of applicants and allocates funds to selected organizations. One of the most significant items in St. Stephens Outreach Program is the partial funding of a new church plant, St. Clares.

An important dimension of St. Stephens outreach is an active ECW (Episcopal Church Women) with 350 members. The ECW raises $50,000 annually beyond the parishs outreach budget and distributes it to worthy causes. Under the leadership of the ECW, St. Stephens has given
wholehearted support each year to the United Thank Offering.

Teams from St. Stephens Hummingbird Fellowship have made five mission trips to the Dominican Republic to build a school and a home for the aged. The missionaries themselves,
with other contributors, pay their travel and lodging costs. Money from special fundraisers and contributors underwrite the construction. The ministry in the Dominican Republic also funds jobs for local construction workers who perform work between our visits.

Other community programs include assistance to St. Peters Episcopal Church and to its Peter- Paul Development Center; City Matters, a committee studying ways to deal with area crime; and the CARITAS Program (Congregations Around Richmond Involved To Assure Shelter).

Congregation
St. Stephens has many lifelong members, contributing to its age diversity. As it is situated in the exclusive west end of the city, the majority of the membership is upper middle and upper class, and mostly of European descent. The congregation is characterized as moderate- conservative theologically.