St. Andrew was the apostle who introduced Peter to Jesus, and the church is named in his honor. Through its long and varied history, St. Andrew’s has not only served the Oregon Hill community but also has become an Institutional Church, serving other sections of the city and the country. The Oregon Hill is rich with churches, such as the Church of the Holy Comforter, Pine Street Baptist, and Laurel Street Methodist. St. Andrew’s Episcopal Church was the first community center in Oregon Hill, which indicates its importance it has had on this neighborhood. For generations, this area was been called the home of the “working man,” a community known for its neighborhood pride and spirit. St. Andrew’s was constructed as a simple, frame-style building and founded in 1874. Its purpose has been described as create a community center, better the neighborhood and promote peace within the city.

St. Andrew’s church was the outgrowth of what was known as the Belvidere Mission School. A committee from St. Paul’s Episcopal Church investigated the various sections of the city to determine their needs and concluded that Oregon Hill was in need of assistance. In 1873, a group of 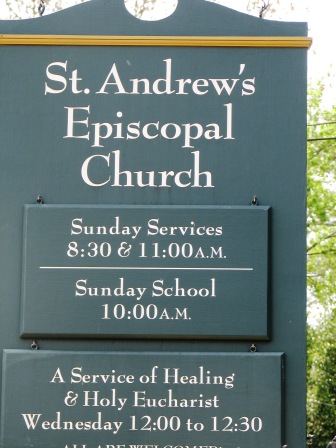 young men from St. Paul’s Episcopal Church started a Sunday school which had sixteen teachers and 109 scholars. Within two years, a core group of worshipers formed a congregation and made plans to build a mission church to serve the neighborhood. As the school’s popularity grew, expansion space was needed; and additional land was purchased for this expansion in 1875. As 1877 drew to a close, St. Andrew’s Church, a Gothic, wood-frame structure, was built and consecrated. Services began Sunday mornings once this new addition was built and the congregation began with a communion list of thirteen.  Bishop Whittle of the Diocese of Virginia consecrated St. Andrew’s Church on December 4, 1877. The Congregation continued to grow. By 1899, the Vestry had envisioned a larger, stone sanctuary that could accommodate five hundred or more people.  The cost, however, was beyond the means of such a young church.

Grace Arents (the niece of Lewis Ginter) had taken an interest in the Oregon Hill community. In 1984, she had founded St. Andrew’s School and the city’s first free kindergarten to serve the working class neighborhood. A series of other community “firsts” had resulted from her generosity: the first night-school for working boys and girls, Richmond’s first free library (now William Byrd Community House and library), the first school for the deaf, a sewing school, and the first home of the Visiting Nurses Association. In addition to her dedicated support of educational and vocational programs, Miss Arents took St. Andrew’s Church under her wing. She donated a large sum of money for construction of the new church and its organ and also assumed oversight of the church’s financial administration and construction. Work on the new church began in January 1901 and was completed two years later. 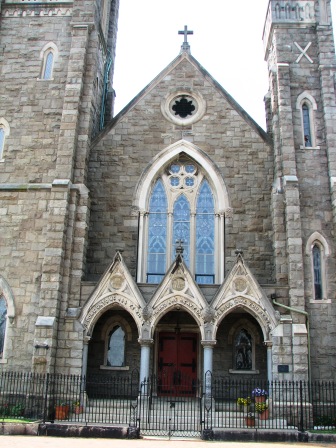 St. Andrew’s has two Sunday morning services. The earlier service is a quiet, spoken service, and the later service has music with special anthems from the church choir.  The church celebrates Holy Eucharist (or Communion) at its services every Sunday, as an expression of the centrality of the Eucharist to Christian faith. During the middle of the week the church offers a noonday Eucharist, with prayer for healing. On the second and forth Wednesdays, the church holds Celtic Evensong, which is a contemplative service drawing on traditional Celtic hymns and prayers.

St. Andrew’s is involved in a variety of activities and outreach programs. The church has Celtic evening prayers on the second and fourth Wednesday evening of each month. The church has a partnership with the Holy Comforter and St. Marks Episcopal churches and holds Midweek Youth Sessions (for all middle and high school youth) on the second and fourth Wednesday evenings of the month.   These events allow the senior high to take on a leadership role and perform community service activities while learning about Christ. There is also a youth Sunday school group for children of all ages to attend. The youth meet for Sunday school in the chapel of the school building where they participate in a lesson and learn songs that are periodically sung as a group during church worship. Each month church members are offered the opportunity to volunteer their time for community activities.

Profile prepared by Kim O’Connor
May, 2008