In the late 1970s, there were only about thirty Sikh families in Richmond; most had moved to Richmond to attend the Medical College of Virginia at Virginia Commonwealth University. By the late 1980s, they began to organize and plan to construct a Gurdwara. Their search for land was complete by 1998, and ground was broken for the Gurdwara in 2000. The Gurdwara was available for use in 2001 and by 2002 a Granthi (priest), Bajakuljaeet, had been appointed. In 2003 the congregation divided due to a growth in the Sikh population to about 200 practicing families, with a resulting overcrowding of the existing Gurdwara. A second Gurdwara was established , the Guru Nanak Dev Foundation. Most of those who attend the Gurdwaras are in the professional class with occupations primarily in the medical fields. 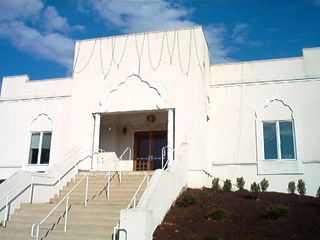 Upon first entering the Gurdwara, Sikhs remove their shoes and leave them either outside or in a small room designated for that purpose. Men usually are wearing their “Pugs” (turban-like head coverings) and women will wear a shawl like covering over their heads. Men who do not cut their hair will wear a handkerchief over their head.

When Sikhs enter the Gurdwara, they proceed to the front and either bow their heads in respect/prayer or kneel to the floor and touch their heads to the ground in front of the Granth Sahib. There may be a box nearby for donations.

Men and women take seats on opposite sides of the Gurdwara and remain separated. This practice is intended to prevent distractions and allow worshipers concentrate on God and prayer. The “sermon” is performed first in Punjabi with readings from the Granth Sahib, and then explained and translated in English. Usually a power point is provided with the text in both Punjabi and in English above the Granthi and Granth Sahib. At the end of the service, a sweet (Prushad) is passed around to everyone to replenish the energy spent in worship. Everyone then rises and moves to an adjacent room. Everyone again sits on the floor in front of place mats. Plates filled with food are then passed to everyone. This part of the ceremony is designed to build community as well as offer charity. In India, this would be an occasion at which the homeless or less fortunate would be provided a meal. In the United States the ceremony usually involves only members of the Gurdwara.