The Second Presbyterian Church was completed in 1848 and stands as the only Lafever building constructed in the South. This Church was the first gothic building and first gas-lit church in Richmond. It is presently listed in the Virginia Landmarks Register, which calls it the “most beautiful specimen of Gothic (Revival) Architecture in the city.” Additionally, it is listed in the National Registry of Historic Places. The gothic style of the Second Presbyterian Church, located on Fifth Street, stands in stark contrast to the more pervasive classic Greek architecture found in the city of Richmond.

This beautiful gothic style church of the Second Presbytery includes pointed Gothic diamond-paned windows, tall Gothic doors, high cruciform roof, and unique brownstone battlements, distinctive Gothic ironwork along the front of the façade, and a 120 foot bell tower with four stone pinnacles. The church sanctuary includes a hammer-beam ceiling, and all interior woodwork, including the ornate reredos screen behind the pulpit, was painted golden oak. 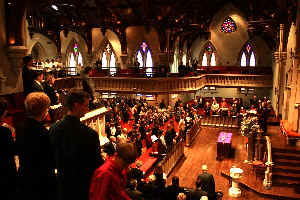 Additions to the Second Presbyterian Church included the communion table and the Tiffany-made bronze tablets doorways which were added in 1869. The sanctuary transepts were installed in 1873 to create the present cruciform plan, and in the chapel a Tiffany window was installed in 1897. Because cost exceeded budget, the original installation of the church bell was delayed. Finally, in 1995, the bell was installed and was used during the Second Presbyterian Church 150th Anniversary Celebration.

The Second Presbyterian Church was the church that Stonewall Jackson attended when he was in Richmond during the war. Stonewall Jackson pew is located in the south gallery, fourth pew from the rear of the sanctuary. It is marked with a small brass plaque. Additionally, during the war the chapel served as a hospital. In 1865, the city of Richmond was burned to keep munitions from falling into the Federalist hands. During the burning of Richmond, one of the munitions piles exploded, causing the church’s stained glass windows to be blown out. The stained glass that could be salvaged after the explosion was stored in the sanctuary attic until the church undertook restoration in 1973. This historic stained glass was reinstalled in the narthex on the Fifth Street side of the church.

Another historic building of the Second Presbyterian Church was the Gibbon-Hoge House, located on the northeast corner of Fifth and Main streets. It was built in 1809 by Major James Gibbon, a celebrated Revolutionary War hero. It became Moses Hoge’s residence during the Civil War. The Gibbon-Hoge House has hosted many famous guests, including the Marquis de Lafayette, Thomas Jefferson, James Madison, James Monroe, Jefferson Davis, Robert E. Lee, Joseph E. Johnston, and Stonewall Jackson. The Gibbon-Hoge House was demolished in 1902, three years after Moses Hoge’s death and the Virginia Building was built in its location.

The congregation consists of primarily middle and upper-middle class families. Most members are of European descent, with a small percentage from different ethnic backgrounds. The congregation is approximately 58 percent female and 42 percent male. The church pastor is Dr. O. Benjamin Sparks and the Associate Pastor is Janet James. They are supported by a large staff, which administers the following programs: music, youth ministries, children’s ministries, daycare, and outreach programs.

The content of Sunday services are determined by the local pastor and follow the guidelines of the PCUSA church’s governing body. Sunday service typically includes prayer, music, scripture reading, sermon, sacraments, time for personal response, and community concerns. In addition, Sunday school classes are held each Sunday, and there are evening services held during the week at various locations throughout the community.

According to the Second Presbyterian Church website, “While our name is “Second”… We aim to be FIRST in friendliness and caring, both for our congregation, our visitors, and our community.” The Second Presbytery was the first to open a child care center and the first to provide a prison family service program. Additionally, the Second Presbytery provides internal ministry for its members; these include music, radio, youth and children ministries, educational schools, nursery, and preschool.