The Pentecostals of Richmond

Along Chippenham Parkway a large, concrete cross is visible from the roadway. With the exception of the large cross that commands attention, the church itself may be easy to miss. At first glance, the church looks as if it is just another large warehouse so commonly seen off of Chippenham Parkway. Upon closer scrutiny, the façade clearly resembles traditional brick churches, with a modest steeple. The accompanying building next to the sanctuary has the appearance of a small community center. The church was founded by Reverend Joe Forbush in 1988. The church building was constructed in 1995 and is commemorated by a cornerstone for Rev. Forbush. The Pentecostals of Richmond was and is still commonly referred to as First Pentecostal Church of Richmond. The church website states that the church has changed it’s name, but some of the parishioners still refer to it as First Pentecostal. 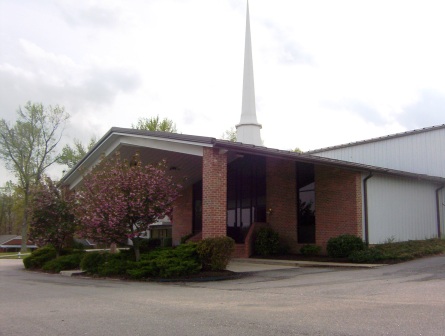 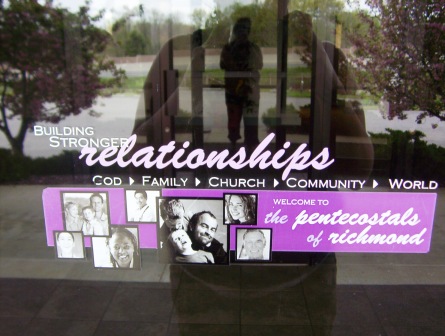 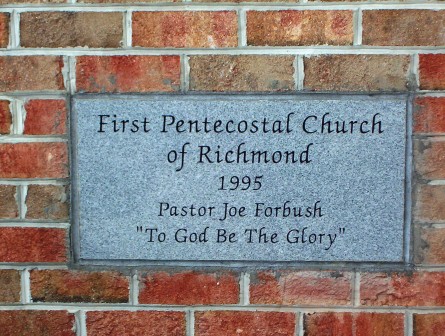 The church website states, “ The United Pentecostal Church International (UPCI) has been among the fastest growing church organizations in North America since it was formed in 1945 by the merger of the Pentecostal Church, Incorporated, and the Pentecostal Assemblies of Jesus Christ. From 617 churches listed in 1946, the UPCI in North America (United States and Canada) today lists 4,358 churches (which includes 4099 autonomous and 258 daughter works), 9,085 ministers, and reports a Sunday School attendance of 646,304.  Moreover, it is also located in 175 other nations with 22,881 licensed ministers, 28,351 churches and meeting places, 652 missionaries, and a foreign constituency of over 3 million, making a total worldwide constituency of more than 4,036,945.”

The Pentecostals of Richmond describe their services as vibrant. Their worship services are filled with lively and inspiring music. Members refer to their music as “anointed.” Their website states, “ We are a Bible believing church. We believe in miracles, healing, and the new birth experience as stated in the Book of Acts. Even though Jesus Christ died for sinners, He is not still on the cross, but lives in and through us. He is our Comforter and our Counselor, and most of all, He is the Way, The Truth and The Life.”

The Pentecostals of Richmond hold services on Sunday morning and evening. There is a mid-week Bible study group and a prayer service. Youth activities are held on Fridays. There is a service in Spanish on Saturday nights that is intended to reach the Spanish-speaking community, and Sunday services do include interpreters. The Pentecostals of Richmond have a vibrant music tradition that incorporates modern music, lively beats, and spiritual messages. The church sponsors youth choirs, adult choirs, musicals, and a live band. There are also Christian performing arts events during liturgical seasons and holidays.

The church offers a Bible study program that allows their members to study the Bible from home. It establishes a study-guide and walks people through various parts of the New Testament. The church asserts that it is critical for an understanding of the truth of God’s word that believers accept that the Bible is the sole authority for life and answers to life problems. If those who are studying the Bible have trouble understanding the scripture, they may call the church for assistance, which may consist of a phone conversation of a home Bible study session. Connected with the Home Bible Study is the Friend’s Fellowship, which is a weekly meeting at members” homes to discuss the Bible, the Word of God, and spirituality in a Christian fellowship setting.

The church also has several different ministries for members of various age groups. Like most Christian traditions they offer a Sunday School for all age groups, including a nursery. There are also groups for men, women, youth, and singles. The men’s group, M.O.S.T. (Men of Steel, Together) aims at strengthening men through faith and group encouragement, inspiring them to lead a life more fulfilled. The women’s group, W.I.S.H. (Women in Sisterly Harmony) is not only a prayer group but also an active coordination group for church events. Both of these groups are intended to help strengthen the faith of believers so that they may in turn strengthen their families and marriages. The Singles Ministry, (S.O.S. – Sold Out Singles) was created to address the issues facing modern singles with a faith-based perspective and focus. All groups are intended to increase spirituality and engender spiritual and social growth.

The Youth Ministry is called, R.A.G.E., Reaching a Generation for Eternity. They hold weekly services and activities and participate in youth oriented activities on a regular basis. R.A.G.E. was created to help instill values in youth that allow them to live within God’s purpose. In conjunction with the youth program is also a Boys and Girls Ministry that involves physical and social activity in coordination with Bible studies and spiritual exploration. This is aimed at youth ages seven through twelve.

The Pentecostals of Richmond offer what is called the Encounter Retreat, which they refer to as “A life-changing event where we spend two days at the foot of the cross.” The retreat is geared toward adults and youths and is intended to offer solitude for contemplation along with “Bible teaching, personal ministry, life changing encounters with God.” The retrea is intended to help members and believers “ Be sure of your salvation, Experience genuine repentance, Be set free by forgiving those that have hurt you, Experience the power of the cross, Break all chains that bind you to the past, Receive inner healing and be made whole, Receive and experience the power of the Holy Ghost, Receive clarity for God Vision for the end-time harvest of souls. The Encounter is an experience of coming face to face with God and His Word. You will understand the revelation of the power of the cross more than ever before. The Encounter confronts you and your past and uproots its negative influences totally from your life.”