The Moorish Holy Temple of Science was founded in Newark, New Jersey in 1913 as the Canaanite Temple by Timothy Drew, who was born in North Carolina in 1886. He later assumed the title Noble Drew Ali and established the first Moorish Holy Temple in Chicago in 1925 just four years prior to his death. Following Noble Drew Ali’s death, the group experienced several schisms, including one led by Wallace Fard Muhammad, who subsequently formed the Nation of Islam. The Moorish Holy Temple teaches that African Americans are the descendants of the Moors (Moabites) and thus originally were Islamic. Members therefore reject categorization Black, Colored, or Negro as a prejudicial misidentification of their actual heritage. They indicate their Moorish origins by adding suffixes (El or Bey) to their last names. 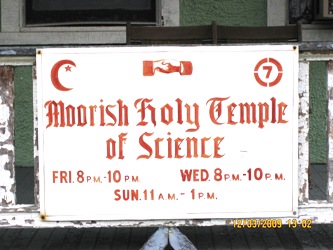 The Moorish Holy Temple of Science in Richmond was chartered on June 28, 1981 and has four temples that fall under its name and administration, which are located in New York, NY, Newark, NJ, Atlanta, GA, and Richmond, VA. Every year in October, there is a convention held at one of the four locations to elect new officials, affirm goals for the coming year, and host gatherings for food and conversation. The Moorish Holy Temple of Science is one of several Muslim temples in the Greater Richmond Metropolitan Area, but this mosque provides services to individuals who designate themselves as Moorish-American individuals, who are referred to as Moabites in the Christian Bible. One of the primary goals of the Moorish Holy Temple is to educate and uplift the spirituality of Moorish-Americans, who are believed to be unaware of their true nationalities. The temple aims to restore their Muslim identity through the assignment of slave names, such as negro, colored, and black, by American slave owners. The temple seeks to help its members re-establish their identities by replacing the British first and last names that many carry from an earlier era with personal names that are representative of their national heritage. 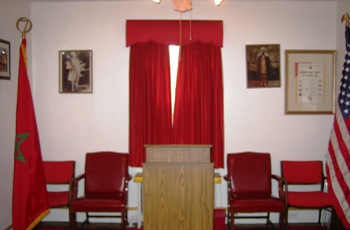 The Richmond temple is located in the North Side of the City of Richmond in a house that is rather conventional in appearance. Although most of the members are Moorish-American, this is not strictly required. For example, there is one Haitian-American member. There currently are approximately fifty to seventy members of the temple, including children. While some of the members are strictly vegan, most of the members are vegetarian, and they are allowed to eat cheese and drink milk if they choose. Members are allowed to consume fish for the purposes of taking in the necessary dietary iron nutrition. All of the members practice cremation upon death, believing that to bury their dead is to contaminate the Earth’s soil. In order to represent their newly discovered nationalities, all members are required to carry a nationality card. The members of the Richmond temple practice Tae Kwon Do, to develop mental and physical discipline to go along with the spiritual and mental discipline they gain from their religious practices.

During services, men, women and children dress in ceremonial clothing, which consists of traditional Islamic robes of various colors. Men wear a traditional fez, often colored red, while women wear turbins, often colored white. The temple holds a service known as the Friday night holy meeting each week. During this meeting the members give honor to Allah and his prophet, under the direction of their teacher. These Friday services are open to the public. After the members give honor, the teacher reads from the Quran or from the temple’s questionnaire. Following the reading, the assistant teacher usually reads from the Divine Constitution and By-Laws. For the children of the members or the local community, there is sometimes a Sunday School service. During these services, the children listen to questions about the scriptures contained in a “questionnaire booklet” and then recite the answers to those questions that are contained in the booklet. Children also are instructed in arts and crafts activities.