Lyndale Baptist Church came out of humble origins during the late 1960’s. Before the church had a name or building of its own the congregation held services in various private households of the congregation members. A few years later, during the early 1970’s, the congregation members purchased a barn, and Lyndale Baptist Church was born. The present day incarnation of the church is located on three acres of pristine grounds at the corner of Hull Street Road and Walmsley Boulevard . There are several structures with specific purposes located on the church grounds. The main entrance of the church, which was built to resemble a barn, is a two-story main concourse building with a large congregation hall, sub-halls, administrative offices, and a kitchen. Behind the main church, surrounding the parking lot, there is a modern trailer where the youth group meets, an outside picnic area with a kitchen, a children’s playground, and a two-team horseshoe pit. 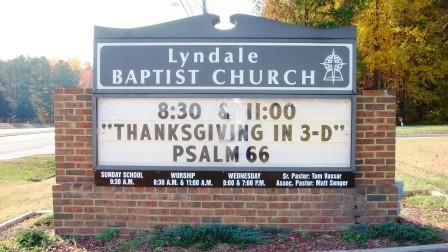 The services at Lyndale Baptist Church are conventionally Protestant, but the church uses contemporary media technologies to enhance the services and create a much more entertaining and compelling message. The sermon begins with a greeting by the pastor with a message of hope to begin the day. After the initial introduction, the congregation is invited to join in to sing hymns and other modern day inspirational Christian songs with live music performed by a band of congregational members. In between songs the pastor reads Bible verses while applying them to modern-day situations and scenarios to provide messages of faith and understanding for the congregation to take home and implement in their lives. 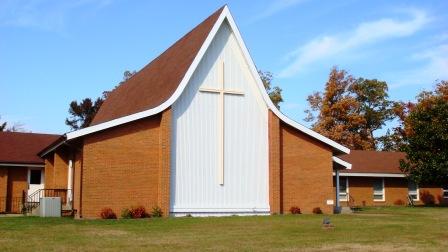 One of the most interesting facets of Lyndale Baptist church is it’s youth group, which is called 3Twelve, a name inspired by a verse in the Bible (Philippians 3:12): “Not that I have already obtained all this, or have already been made perfect, but I press on to take hold of that for which Christ Jesus took hold of me.” The mission of 3Twelve is to teach Christian morals and principles to teenagers between the seventh and twelfth grades by creating lasting social relationships and confronting the challenges inherent in everyday life. The teen group is facilitated by a few adult-youth leaders who take time out of their lives everyday to visit the students within their assigned group at school, church, and home and to encourage them to become successful individuals in both life and as Christians. The group meets once each week, and every week during the month a different activity is planned. During the first week of the month they host a new or established up-and-coming Christian band to encourage the message that God loves everyone equally. This first week is appropriately named “Band Night.” During the second week of the month the youths participate in what is called a “Mission Initiative” in which the members of the group perform different types of outreach service, such as taking gifts to children in need during the Christmas holiday season, and writing letters to a child that they sponsor in Haiti and checking on their progress. During the third week of the month the youths participate in what is called “Large Group,” in which both middle and high school students are involved in social learning activities in a concert atmosphere with visual media aids. They are presented with real-world scenarios in which they have to act out solutions and to decide which outcome would be the bring the best and safest results. During the fourth and final week of the month the group participates in what is known as “Discipline Groups”, or “D-Groups.” During this time the children are not disciplined but rather receive training in morals and are taught disciplines by which to live their lives. It is also a time during which the adult-youth group coordinators speak to and mentor the children. They provide encouraging words, guidance, and support for anything that might be troubling the youth at the time; and they help participants to realize that there is always a light at the end of the tunnel and that life is too short to live unhappily. During the last week the true mission of the group is accomplished, which is to create lasting healthy relationships with other Christian adults and children and to create a network of life-long support.