Leigh Street Baptist Church is a small congregation that was established in 1854. During this time period there was only one Baptist place of worship, First Baptist Church. A portion of the First Baptist congregation wanted to start their own congregation. Miles Turpin was a key individual in the establishment of the new Baptist church. The building was constructed on the corner of 25 th Street and Leigh Street and remains at it original location. Although the building has never changed location, it has been through a series of renovations. The first service took place on December 25, 1853 during the beginning phase of the building. The second phase of the building was completed in May, 1857. Thereafter, two renovations took place in 1912, and an educational building was added for Christian education in 1920. The building, constructed by Samuel Slone, is very unique in its architecture. With a British architected style, known as Greek Revival, the building consists of a circular section that houses Bible study classes, and in some cases serves as an overflow area. The building is listed on the National Registry of Historic places. 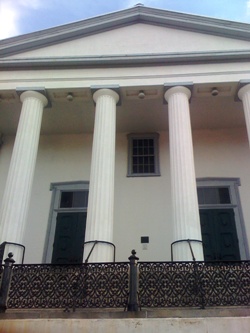 The church hosts an early morning Sunday school class, as well as a mid-morning worship service. The church celebrates Harvest Home, which was started 70 years ago, recognizing the day when the church building costs were paid in full. During this time of recognition, the church takes up a collection from the congregation. Fifty percent of this collection is kept for the church and the other fifty percent is donated to the community for those in need. The church is affiliated with the Southern Baptist Convention’s Richmond Baptist AssociationLeigh Street Baptist church is a small church comprised of about 65 Caucasian members. The church supports a limited number of ministries. The Women’s Missionary focuses on local projects with Virginia State University and Virginia Commonwealth University and its students. The ministry also hosts small fundraisers by collecting soup labels and collecting can tabs. The Golden Club is made up of the older members of the church and dedicates its time to fellowship and fun. The church also participates in helping Bowler Retirement residents by taking them groceries on a monthly basis. The group has also assisted a church in Capetown, South Africa. One of the first initiatives was building a house for the church’s pastor. Leigh Street Baptist was then able to help the church purchase land and a concrete floor that will eventually be the foundation for a permanent structure. The floor currently serves as the foundation for a temporary building that is used as place of worship for the congregation. Leigh Street plans to next help the church in Capetown construct a permanent structure. Churchill Activities and Tutoring (CHAT) is another example of Leigh Street Baptist’s outreach. CHAT is a program that was started by a local member of the Churchill community whose goal was to have a place in which the youth of the community could focus on the importance of education. The organization creates a motivating atmosphere for the youth to channel their energy for educational accomplishment. Leigh Street Baptist Church works with the organization in hosting some of its events.