The Lamb’s World Ministries was founded in 2003 by John and Gail Egnew as a group that combines Christianity and Native American religious traditions. The Lamb’s World website states that “We have been directed of God to provide and atmosphere that is free from prejudice of denomination of doctrine of man, and to present to any such person who will recognize his need, to full council of God, according to the Word of God, in His pure and undiluted Truth.” Members are counseled on the ways of becoming a leader in the community. As Lamb’s World’s mission statement asserts: “It’s the mission of the Lamb’s World Ministries Intl. to minister to Christians who are called to positions of leadership. As many of the ministers that we attempt to assist are outside of the mainstream of Church structure and accountability, it is our goal to first instruct as to the benefits of proper association, and calling can be of the greatest benefit to the whole Body of Christ.” Lamb’s World also acknowledges the repression of Native American spirituality historically. For example, until the time of the civil rights movements in the 1960s and 1970s, it was illegal in Virginia for Native Americans to practice there religious beliefs publically. 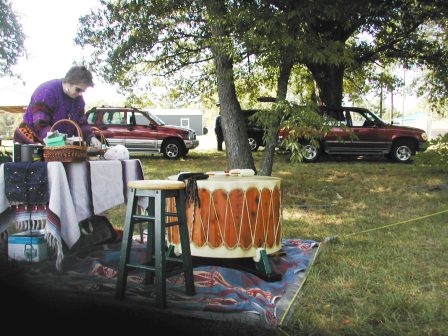 The Three Feathers Gathering sponsored by Lamb’s World Ministries constitutes a way for Native Americans to congregate in a casual setting for worship that incorporates Native American religious tradition. The Three Feathers Gathering is distinctive in a number of ways. God is referred to as the Creator, because members believe that the Creator is the essential purpose in being. The group meets outside in “ Gods Church .” As with many Native American practices, there is a focus on nature and respect for the Earth and humankind. Virtually all Native American tribes have a prayer circle, which is comparable to meeting in a sanctuary in traditional Christianity. For Native Americans, the journey through life is conceived as a “dance,” just as prayer is considered to be a dance. In the prayer circle, therefore, participants dance out their prayers instead of kneeling, which is characteristic of traditional Christian practice. Another ritual involves emotional, psychological, mental, and spiritual purification through “smudging.” Smoke from white sage, which is considered to be the grandmother herb, is combined with pine, lavender, and sweet grass. The smoke attaches to negative energies; as the smoke clears, it takes the negative energy with it, releasing it into another space where it will begin to regenerate into positive energy. Lamb’s World celebrates traditional Christian holidays but also holds pow-wows and gatherings where many of the traditional aspects and practices of Native American cultures are honored. There are gatherings during harvest season to honor Mother Earth and to give thanks for all that the Earth provides.

The Lamb’s World has three leadership positions. There is an Elder figure, a role filled by John Greybear (Egnew). The Elder position is traditionally held by the elder male of the group, just as in Native American tribes the chief position is held by the authoritative male. The role of the Elder is to offer guidance to the tribe. There is also a Grandmother Elder, Gail Egnew, whose role it is to give advice as well as to offer the sermon to the flock, tribe, or group. The third figure is that of minister and the minister is the one who is the speaker for the creator. The minister’s job is to attune themselves to the words of the creator at the given time. Leadership has a special meaning in the Native American tradition since everything in life is understood to follow a circular pattern, which is the reason for the prayer circle. In the case of leadership, it is understood that everyone follows someone else and so no one is better than anyone else and everyone is equal in the eyes of the Creator.

A Three Feathers Gathering or Sunday service begins with the congregation arriving early in the afternoon and enjoying fellowship with one another. As the members get settled, they sit in a circle under the trees and begin with a prayer that is accompanied by drumming by John Greybear, who then offers the first prayer. After the opening prayer, the grandmother elder will begin her sermon. The sermon comes from the Creator and is given to the person who is in the role of minister for that given Sunday. After the sermon is completed, the congregation then makes its way to the prayer circle where participants dance out their prayers. Following the prayer circle, there is some more general fellowship that concludes the service. Three Feathers Gatherings typically include ten to fifteen members, but the number is growing.