Keneseth Beth Israel dates to the merging of two separate Jewish congregations in Richmond in the 1850s, Keneseth Israel and Beth Shalome. Keneseth Israel was established in 1856 with a congregation of about thirty members, primarily of Polish descent. Beth Shalome was formed by Russian Jews who were first affiliated with Keneseth Israel but then broke away due to the Orthodox minhag custom of Keneseth Israel. The minhag custom is the strict adherence to separate seating and the requirement that the president be Shomer Shabbat (an individual a person who observes the commandments concerning the Jewish Sabbath). Beth Shalome became Sir Moses Montefiore Congregation in 1886. At the turn of the twentieth century, the Jewish community participated in the westward movement of the Richmond population. The movement west entailed several congregations merging together and the purchasing of old and new synagogues. In 1948, Etz Chaim and several shteiblachs (very small synagogues) merged with Sir Montefiore to form Beth Israel. Then, in 1952, Keneseth Israel merged with Beth Israel to form Keneseth Beth Israel, which at that time was located on Boulevard Avenue. Later in the 1960s, Keneseth Beth Israel moved further west and established itself on Patterson Avenue in an area of residential neighborhoods with close proximity to St. Christopher’s School. 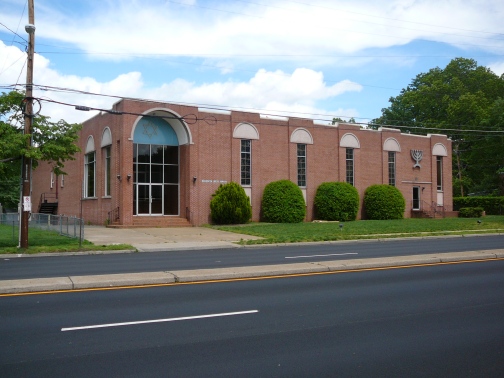 The synagogue follows the Orthodox Jewish tradition. The Rabbi leading the synagogue is assisted by educators from the Rudlin Torah Academy when running services and programs inside and outside of the synagogue. Keneseth Beth Israel currently has roughly 125 single and multi-member families. There are daily morning services with an attendance of between ten and twenty participants. The Sabbath service on Saturday morning is the largest and runs between two and three hours. The service is followed by Kiddush, which is the Jewish collation of serving light refreshments and meals. The services contain the traditional Hebrew liturgy, recited in Hebrew, and sermons, conducted in English. Every Saturday morning, there is reading from the Torah Scrolls that is chanted in Hebrew. There is also a prayer book provided to guide those who wish to have the English translation. The reading of the Torah Scrolls is on a one-year cycle, with members reading five chapters a week beginning in the fall. During the service, men and women are separated. There are three sections of seating; the middle section is reserved for the men who are flanked by the women on either side on a raised seating level.

Keneseth Beth Israel sponsors several different programs and activities. The current rabbi conducts private home teachings and coordinates a lunch and learn program at the Jewish Community Center. There are youth-groups that provide recreational teaching in Judaism. During the week, adult classes are held to discuss various topics in the Jewish faith. Hebrew language classes are also offered. There are trivia nights held at the synagogue. Keneseth Beth Israel also participates in the Jewish Food Festival.

One of the more unique aspects of Keneseth Beth Israel is its heterogeneous congregation. It is one of the few synagogues to be dynamically observant and also tolerant of individual lifestyles. Although the congregation is Orthodox, there is room for diversity and the congregation is able to continue to provide a model of Jewish life in the Richmond Jewish community.