(Video on the difference between Kabbalah and Religion)

(Video on the meaning of being a good person in Kabbalah)

According to The Kabbalah Centre’s website, Kabbalah is “the world’s oldest body of spiritual wisdom (and) contains the long-hidden keys to the secrets of the universe as well as the keys to the mysteries of the human heart and soul.” The primary goal of Kabbalah is to facilitate the acquisition of the hidden knowledge of God and the design or plan for the world. The first kabbalistic text was written four thousand years ago by Abraham the Patriarch. The Zohar, a primary text in the study of Kabbalah, is believed to have been written in the second and third centuries CE by Rabbi Shimon Bar Yochai (Rashbi) and is a collection of commentaries on the written Torah. It is believed to be just as holy as the written Torah itself. According to the Bnei Baruch Kabbalah Education & Research Institute website, the Zohar describes the 125 stages practitioners must go through in order to attain the origin of their souls. Historically, Kabbalah practice was limited to elder rabbis and accepted in some branches of Judaism as an integral part of studying the Torah. Kabbalah was not widely studied for hundreds of years as it was thought that the majority of people were not ready to read the Zohar and interpret it correctly. This changed when Rabbi Isaac Luria (1534-1572 CE) led an effort to insure that everyone could have access to the wisdom of Kabbalah. 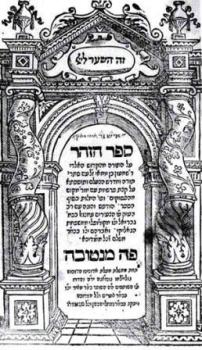 The study of Kabbalah has become more accessible in recent decades in the U.S. as a result of the work of Philip Berg (Philip Gruberger), the founder of the Kabbalah Centre, who felt that people were leaving the Jewish faith due to a lack of “spiritual content.” Berg established the National Institute for Research in Kabbalah, which later became The Kabbalah Centre, in 1965 in New York with the guidance of Rabbi Yehuda Brandwein. The Centre’s main purpose was to publish books that would enlighten the public, Jewish and non-Jewish alike, about the spirituality involved in Kabbalah.

Since Kabbalah has now become accessible to the public, The Kabbalah Centre in Los Angeles, California is trying to spread kabbalistic wisdom by organizing informational meetings in communities around the country. Study groups have been established throughout the country, and around the world, to help people understand Kabbalah, themselves, and the universe. The closest group to Richmond currently is in Washington, DC. As a possible prelude to establishing a study group in Richmond, The Kabbalah Centre hosted an informational meeting at The Omni Hotel in downtown Richmond on January 11, 2009 entitled “Kabbalah: The Best Kept Secret.” This meeting drew a crowd of approximately seventy people, female and male, young and old, established Kabbalists and those interested in finding out more about this once esoteric study. The meeting was hosted by a young kabbalist who had been raised studying Kabbalah. The meeting was interactive in that the audience was asked to share with each other goals, both tangible and intangible, that they wished to attain in their lifetimes. People were asked to shout out some of the things that they had thought of during this exercise. A woman in the audience who said that she had the goal of acquiring a Mercedes Benz was told by the speaker that it was not the car itself that she wanted but the energy behind the car. Once she had the car the feeling of excitement and happiness would soon fade so she would know that it was not the car itself that held the happiness. The speaker wanted people to focus on the energy of life in their search for happiness.

The essence of Kabbalah was then explained to the group. God is known as the Creator. The Creator is an unlimited force of sharing. In order to share the Creator needed something to share with. Thus the Creator created vessels of unlimited receiving (humans). Since humans were created by God they all contain a God gene. This God gene creates a basic human need to give and share in order to be completely fulfilled. Humans thus put up a curtain between themselves and the Creator so that they could stop receiving the light of the Creator and learn to create their own light to give. Now, according to Kabbalah teachings, humans need to remove that curtain so that they can start receiving the light of the Creator again. As individuals transform themselves, they slowly remove a layer of that curtain and understand how they can remove other layers. Individuals must continue transforming negative aspects of themselves in order to completely remove the curtain and become one with God. Everyone has issues, called tikuns, that require personal transformation, and God will provide people and situations that will bring out each person’s tikun and cause them to actively transform themselves.