The original Hebrew Cemetery was created in 1791 on Franklin Street between 20 th and 21 st Streets by the congregation of Kaal Kadosh Beth Shalome (“the congregation of the House of Peace”). It was the first Jewish cemetery in Virginia. Disease and war deaths resulted in the original cemetery being filled to capacity by 1816. In that year the City of Richmond granted the Beth Shalome congregation a second burial ground on Schokoe Hill at Fourth Street and Hospital Street. The first burial took place one year later. The Beth Ahabah congregation received equal burial rights and began sharing the cemetery in 1843. The cemetery acquired a 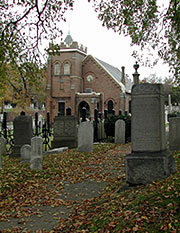 dditional land in 1871 and in 1911, bringing the total cemetery size to eight and a fourth acres. In 1898 Beth Shalome merged with Beth Ahabah, which gave cemetery ownership to the latter. The cemetery was also improved over time. Funds were raised in 1816 to lay out the grounds, build a matahar house, and erect a wall. A chapel, built on the site of the matahar house, was completed in 1898.

As urban development continued, the cemetery on Franklin Street was neglected. Franklin Street was paved and the road surface elevated four feet above the level of the cemetery. Since the graves were unattended, the head stones were purposefully laid flat and the plot intentionally filled in with dirt since it was being used for business purposes. A reporter for the Richmond Dispatch wrote in the May 12, 1866 edition of the newspaper concerning the Franklin Street cemetery:

“[It is] a vacant lot, overrun with rank weeds and grass, showing the track of wagons and bearing the hoof marks of horses, and which is washed into deep ruts and gullies by the rains of many a season. Hundreds of persons pass it by daily, and if they think of it at all, it is as a piece of waste land, most unaccountably allowed to remain in a useless and neglected condition.”

Over the course of the following forty years the cemetery became the foundation for a blacksmith shop and then a coal yard. In 1909 the Jewish community dug out, fenced in and properly commemorated the cemetery and those interned there.

One noteworthy section of the cemetery is what is known as the “Soldiers Section.” This are contains the graves of thirty Jewish soldiers who fought for the Confederacy. The original fence surrounding this plot was designed by Richmond artist Major William Barksdale Myers prior to 1873 and remains in place today. During the 1950s individual grave markers were removed and replaced with a central granite marker.

The cemetery suffered extensive damage as a result of the heavy rains accompanying Hurricane Gaston in 2004. According to the Beth Ahabah website, “As a result, an approximately fifty foot ridge along the edge collapsed, sending fourteen graves down hill and necessitated immediate rip rap temporary repairs and emergency tree removal to keep additional ground from being pulled downhill during the flurry of following storms.” The fourteen graves were reentered in the newer section of the cemetery and donations of time and funds are bringing about repairs to the damaged land.