In 1790, a small group of Presbyterians and a group of Episcopalians shared the use of the hall of the Virginia House of Delegates for Sunday morning worship. This early ecumenical congregation also shared the pastoral services of their two ministers on alternating Sundays. When the Richmond Theater burned in a disastrous fire that cost many lives on December 26, 1811, the Episcopalian congregation moved into the reconstructed building, and the Presbyterians continued to worship in the capital. However, in 1822, the Presbyterians decided to build their own house of worship and purchased a lot on the corner of Eighth Street and Franklin Street. The Shockoe Hill Presbyterian Church was a handsome brick edifice with a steeple and an iron rail. 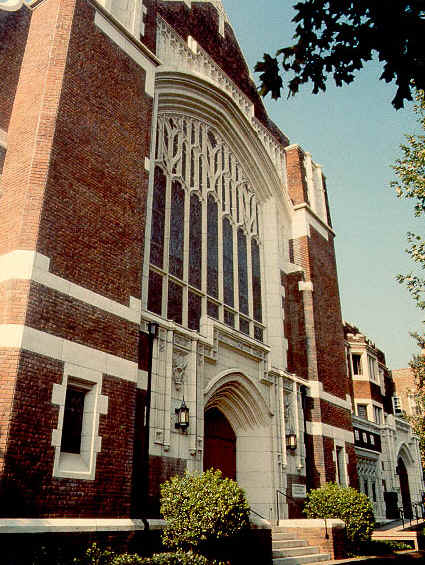 In the late 1830s a controversy emerged within the Presbyterian Church in the U.SA. between “ New School” and “Old School” Presbyterians over whether to continue a partnership with the Congregational Church that involved the two churches evangelizing together, sharing pulpits, and supporting reciprocal membership rights. New School Presbyterians wanted to continue that arrangement while Old School Presbyterians were opposed. In Richmond that controversy erupted in 1838 within the First Presbyterian Church, and about ninety members and all the elders withdrew from First Presbyterian and eventually joined the Shockoe Hill Presbyterian Church. The old Franklin Street building became the house of worship for the new congregation, which was now called the United Presbyterian Church on Shockoe Hill. After the merger, a steeple was built and a bell installed. A new building was erected in the rear for the lecture and Sunday school rooms built in 1839. In 1841, the United Presbyterian Church contributed greatly to the domestic missionary society of Hanover Presbytery. A large portion of the donations came from a Ladies Circle of Industry and was earned by selling elegant needlework at the annual fairs held in the lecture room. In 1841 it became the practice to ask for voluntary offerings to help liquidate the church’s construction debt. When there were insufficient funds for improvements to the Sunday school room by 1856, the ladies of the church assumed responsibility for raising the necessary money. 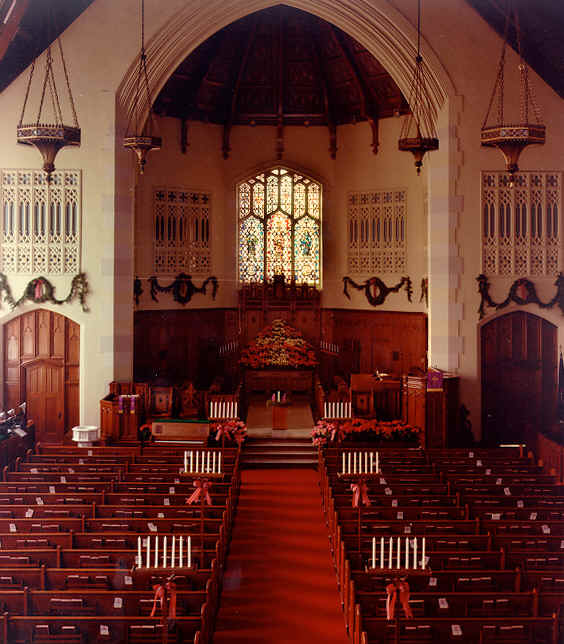 Two additional conflicts emerged within the Presbyterian Church U.S.A. that divided Old and New Schools. In 1846 the two schools divided over whether slave owners should be allowed to take communion, with the Old School in favor and the New School opposed. In 1861 there was a further division over the Civil War. Southern churches formed the Presbyterian Church in the Confederate States of America. In Richmond, the United Presbyterian Church gave its church bell to the Confederate Government in 1862 to be converted to a cannon, but at the war’s end it was discovered along with many other church bells in the Tredegar Iron Works and confiscated by the U.S. Army. The pew cushions were given to the Confederate army, presumably for use as beds in the emergency hospitals. The church was paid for them and the money was then invested in confederate bonds.

On April 3, 1865, the United Presbyterian Church burned in the disastrous fires following the Confederate Army’s evacuation of Richmond. During this time the Second Presbyterian offered to have the United Presbyterian congregation worship with them. This plan was followed for eighteen months before the congregation rented the Virginia Hall on Ninth Street as a temporary home. A lot was eventually purchased on the northeast corner of Grace and Fourth Street. Construction was started immediately and the first floor lecture room of the church was completed in 1868. In May, 1870, while the church was under construction, its name was changed to Grace Street Presbyterian Church. Construction was completed two years later. 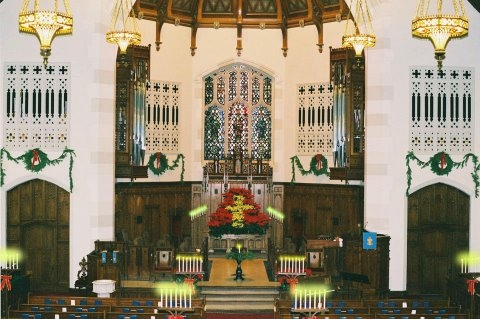 After several years of steady congregational growth, the church determined that a new building was needed. As a result of a donation by Matthew Gilmour, a lot for the church building was secured at the corner of Harrison Street and Park Avenue. A granite chapel was erected on the rear of the lot and dedicated dept-free on December 11, 1891. The name of the congregation was changed at this time to The Church of the Covenant. A mission chapel was also built on Beverly Street. Later the building was sold and the proceeds applied to the new building at Park Street and Harrison Street. This new building was completely finished on December 15, 1907.

In 1918 the Church of the Covenant buildings were sold to a Masonic order. A Scottish rite fraternal group later used them until the buildings were purchased by Virginia Commonwealth University and razed to make room for what is now the performing arts center. The sanctuary was remodeled in 1922 to follow the ancient tradition of telling the Bible story in symbols, carving, and stained glass windows. A new pipe organ and communion table were given to the church, and a new baptismal font was given in memory of a former pastor.

In 1963 the church was able to obtain an important part of its history. The city of Richmond gave the church the 3,000-lb. bronze bell from the old Grace Street Presbyterian Church for the nominal price of one dollar. The bell had been used in Gray’s Armory, which was in the process of being demolished. The bell now resides under the rear portico above the cornerstone taken from the granite chapel of the Church of the Covenant.