In 1857 Richmond was flourishing and greatly expanding, particularly to the west. In order to keep up with the growing congregation, Samuel P. Mitchell treasurer of St. Paul’s Episcopal Church proposed that a new church be founded in the expanding west end of the city. A lot was acquired for $4,270 at the northwest corner of Main and Fourth Streets; the property was sixty feet wide and extended 147 feet. The construction of the church was completed by the fall of 1858 at the cost of $10,300. On May 21, 1858, Mr. Mitchell presented a signed petition before the annual diocesan convention meeting asking that the new Episcopal Church known as Grace Church be established in the capital city. The church was admitted into the diocese on May 22, 1858. At this time regular services were being conducted by Mr. Baker and a Sunday school with twelve teachers and sixty scholars was in operation

In 1873 a lot on Loral Street was purchased by St. James Episcopal Church to construct a “convenient house of worship.” In 1874, Moore Memorial chapel (later to be renamed Holy Trinity) located on the edge of the old fairgrounds (now Monroe Park) was completed. This house of worship in 1879 was declared independent of St. James and directed that it be know as Moore Memorial church. Four yeas after Moore Memorial became a separate congregation the vestry began to plan for a larger permanent house of worship. In 1884 the vestry accepted a gothic design and appointed B.J Black architectural director. The new building was completed in late 1887, and the first service was held on January 1 1887. An article in the Southern Churchman praised the new structure, particularly its handsome interior with vaulted ceiling, its walnut pews, and its brass lectern. On February 12 1894 the church was named Holy Trinity. 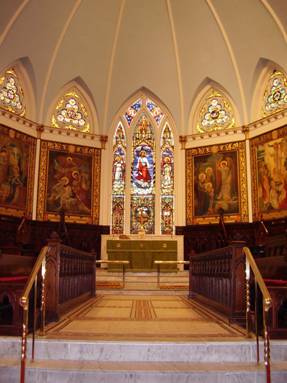 The consecration of Holy Trinity church in 1907 made the front page of the Richmond Time’s Dispatch. Around this time the women of the church began the continuing Holy Trinity tradition of making and selling their secret, carefully guarded plum pudding recipe. All the proceeds from sale of the pudding go to funding their work in and for the congregation.

On June 1, 1924, the congregation and Sunday school of Grace Church assembled for the last time at Fourth and Main, then walked west in a body to Laurel Street where the congregation of Holy Trinity was awaiting them. The combined congregations then entered the church for the first service at Grace and Holy Trinity. On June 3, the antiphonal organ was removed from Grace Church and reinstalled at the now Grace and Holy Trinity. Due to the great increase of members a lot on North Laurel Street was used to establish a parish house.

During the time of the great depression another Grace and Holy Trinity tradition was born, the corporate community breakfast for the city’s social workers, held every spring on passion Sunday. This event began in 1934 and is notable for the fact that it was not racially segregated. 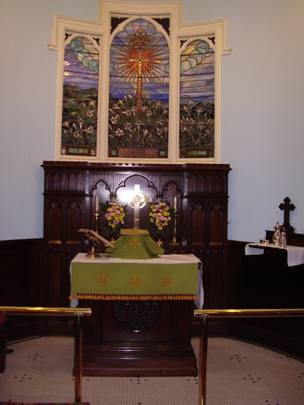 In May of 1951a tornado swept through Richmond and caused widespread destruction, including the church’s gothic steeple. The damage was so extensive that the steeple had to be removed. Rev. Ribble convinced the congregation that the money to repair the tower would be much better used in Brazil, and the steeple remains unreplaced.

In 1965 due to the new growth brought on by the newly established (1970) Virginia Commonwealth University, the Grace and Holy child care center was established. In 1978 the old organ from the start of the newly joined Grace and Holy Trinity was replaced with the new Austin organ which is still in use today. In 1979 negotiations with the neighboring Catholic church led to an “exchange of parcels” located between Laurel and Cherry Street. This arrangement made room for the enlargement of the parish building. The old parish hall was demolished in order to provide an enlarged parking lot that was shared with the Catholic Church. In the new parish building a large modern kitchen was built. The kitchen is used to prepare the parish breakfast (a Sunday morning event begun in 1982 that provides all worshipers, including the homeless, a hot morning breakfast) and the weekly soup kitchen (launched in 1985, a meal of bean soup with sausage sides and a hard candy peppermint as dessert).

Grace and Holy Trinity Church is very involved with the community. They provide the William Bird House with an after-school k-5 program. They serve CARITAS as an intake shelter for those waiting for transportation to church night shelters. Within the church there is a missionary society program that offers small mission trips and is currently trying to develop an ongoing mission relationship with Brazil and Panama. Grace and Holy Trinity’s campus ministry also works closely with the missionary society and is deeply involved with helping the community and serving as a helping family within the church. Grace and Holy Trinity itself also makes substantial monetary grants for a variety of purposes, such as renter assistance. In cooperation with other groups Grace and Holy Trinity Church is involved in creating Area Congregations Together and Serve (ACTS) that will be a local clearing house agency for the working poor.