History
First Unitarian Universalist Church has quite a complicated history in Richmond, undergoing numerous changes before the current church building and congregation emerged. The story begins in 1830 with the arrival of John Dods in Richmond and his uniting of the local Unitarians and Universalists to establish the Unitarian Universalist Society of Richmond. The first church was built in 1832 and the name was subsequently changed to the First Independent Christian Church. This church underwent some tumultuous times due to the local adversity to liberal ideas and by 1903 the church was sold. But, in 1893 the Reverend George L. Chaney traveled to Richmond from Atlanta to aid in establishing a Unitarian Church. Indeed, a congregation was formed and services were regularly held in Belvidere Hall. Thus, the First Unitarian Church of Richmond was established December 31, 1893. This church, too, struggled during its early inception; but, by the arrival in 1904 of the minister John L. Robinson the situation looked more promising. In 1906 a church building was completed on Floyd Avenue and Harrison Street and membership growth resulted. Throughout the following years the church emphasized its focus on social service and gained a solid reputation. However, the Depression and World War II once again provided setbacks for the church. Nevertheless, the church survived and membership grew once again during the 1950s and 1960s. The current church on Blanton Avenue was built in 1972 and even won an architectural award for its design. The churchs name was changed to the First Unitarian Universalist Church in 2004, reflecting just how much the church has changed and grown since its beginnings over a century ago. 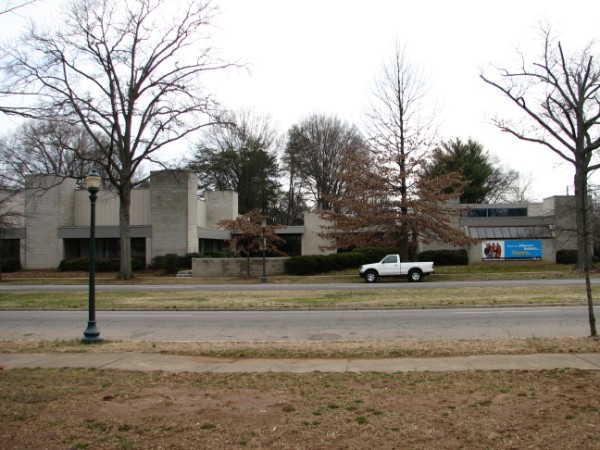 Rituals and Activities
First Unitarian Universalist Church maintains an active schedule throughout the year. There is an hour-long service every Sunday at 11 am. According to the churchs website, a typical Sunday service follows this format: welcome, prelude, opening words, hymn, the lighting of the chalice, music, meditative reading, silent meditation, music, sermon, offertory, closing words, and a postlude. A description of each Sundays sermon, as well as archived sermons, can be found on the churchs homepage. There are also religious education classes that children can attend instead of the service. These classes introduce children to various faith traditions. Prior to the 11 am service, at 9:45, there is a Contemplation and Conversation service. It is somewhat similar to the traditional 11 am service; but, during this service a guest speaker addresses a chosen topic, including everything from political to health to religious issues. A discussion ensues. Fellowship follows both of these Sunday morning services. 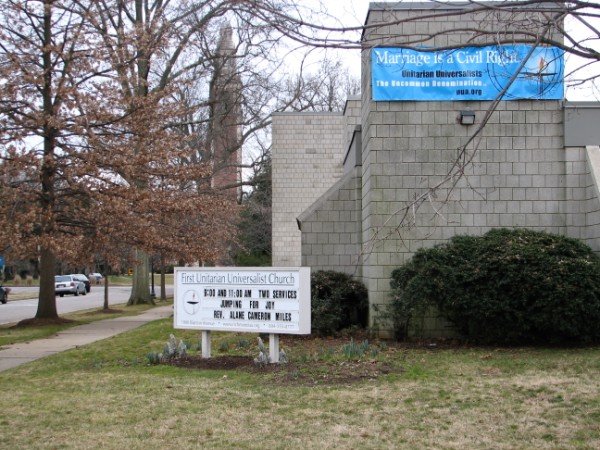 Numerous social action committees also meet at the church, many of which are listed in the programs and outreach section below. Fellowship is also an important aspect of First Unitarian Universalist. A Loss Support Group meets twice a month (at 12:45 pm on the second and fourth Monday of each month) to offer support to anybody grieving a loss. Some of the more lighthearted fellowship groups include the quilting club Quuilters, the Writers Group, an investment club called the Univestors, the Dining Out Group, and many more. The church even has its own softball team, the Unibombers. On any given week the UU Singers can be heard practicing in the church library in preparation for their Sunday service performances.

Associated Units
First Unitarian Universalist is associated with the Interfaith Council of Greater Richmond and is a member of this organization of 21 different faith groups celebrating both unity and diversity. The church has spun off two other affiliated congregations with which it retains close ties, the Unitarian Universalist Community Church in Glen Allen and the Jenkins Memorial Fellowship in Petersburg.

Programs and Outreach
First Unitarian Universalist Church is characteristic of many Unitarian Universalist communities in its involvement in social progress and change. The Social Responsibility Council is an organization that oversees several church committees. One such group is the Earth Committee, focusing on environmental stewardship through education and projects. Some groups are more concerned with human relations, like the Racial Harmony Committee, ensuring a multicultural and anti-racist congregation within the church as well as the larger community. There is also a Welcoming Congregation program that seeks to make the church more welcoming of gays, lesbians, bisexuals, and transgender people. Other types of social groups abound within the church, such as the Richmond Coalition for a Living Wage and the Unitarian Universalists for Alternatives to the Death Penalty. This latter group tracks capital punishment issues through the Virginia General Assembly and holds vigils outside of prisons on the nights of executions. The Virginia Unitarian Universalist Voice is also politically active and even holds training sessions for UU members across Virginia, making a liberal voice heard in Virginia legislative issues. PeaceAndJustice is another group interested in social justice matters and also manages the Fair Trade Coffee Project. This project ensures that low-income coffee farmers receive a fair price for their goods by purchasing coffee directly from the fair trade organization Equal Exchange. The public can buy Fair Trade Coffee on the first and third Sundays of each month. The church is also involved in several community service projects. One of these is Mitten Tree, in which members of the congregation buy Christmas presents for mentally disabled adults. Non-perishable goods are also collected through M.A.R.C.H. and eventually distributed to needy Richmond families. One of the churchs largest projects is CARITAS, during which the churchs basement is transformed into an adult homeless shelter for one week. Several more committees/service projects not listed here are described on the churchs website, linked at the top of this page.