Hank Jones, founder of nondenominational Faith Warehouse Ministries, likens himself to the biblical figure Jonah. Just like Jonah, Hank Jones believes he was given an assignment by God to reach out to His people in the Richmond area. However, Jones states that he refused time after time, thinking that he should not be the one to lead and carry out the message of God. He states that he did not realize his purpose and what God had in store for him. According to Jones, God was patient with him and gave him time to come willingly. When Jones finally acknowledged his purpose and that God had a plan for him and his people, he wanted to be God’s tool to carry the message to the people. Jones believes that God has been able to use him to get in touch with His people. Pastor Jones is currently attending Liberty Baptist Theological Seminary. 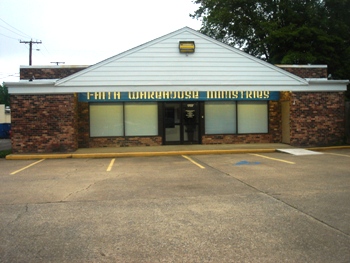 After extended prayer, Pastor Hank Jones and his wife Hellena Jones started Bible study in their home. The Bible study began to expand, and the group needed a larger location in which to meet. As Jones and his wife developed their mission to serve the Lord, they realized that there were many people who were interested in their teaching. The two report that they continued their prayer for God to give them a place where they could worship. After prayer and preparation, they proceeded with their vision to plan a new church in Richmond. They recognized that this would not be but believed that with the help of God they would be able to find a place where they could meet for worship. What is now Faith Warehouse Ministry began in 2005 on Commonwealth Ave in a building that previously was a 7-11 convenience store. They have converted the space to be a place of worship open to everyone.

The Faith Warehouse church describes its vision as “to be blessed and to be a blessing, to be a distribution center of God’s presence and His gifts. To do a quick work, that will be cut short in righteousness and to build souls and not a church. Currently there are over thirty people meeting every Sunday. The church membership is primarily African American and African American / Hispanic. The Sunday worship service begins at noon. The church also has Bible study and prayer regularly on Tuesday and Wednesday evenings. The Sunday service usually begins with about thirty minutes of contemporary music and prayer. During this time the pastor prays for individuals while the members of the church freely sing and pray by lifting their hands and crying out to God. Pastor Jones then delivers his message that he understands is given to him by God. The church has a special relationship with several other faith communities in Richmond, including ReJOYce in Jesus Ministries, Masters Touch Ministries, and Ministry without Walls.